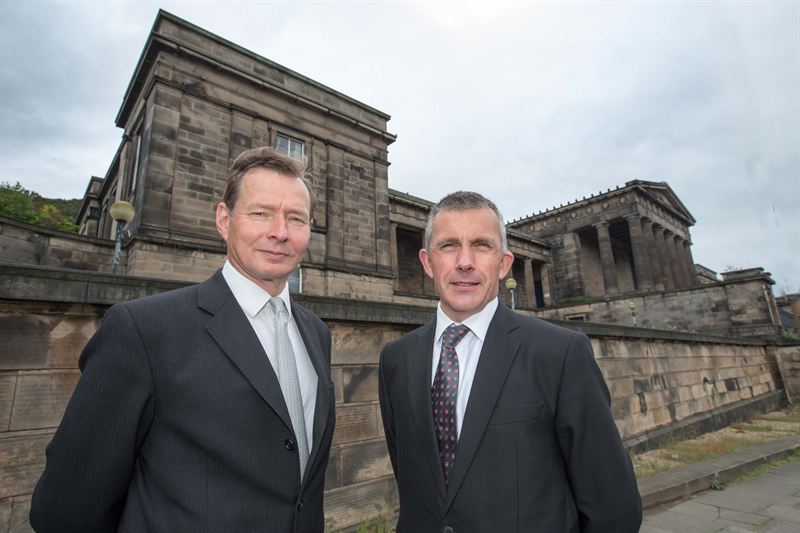 Backed by the philanthropic Dunard Fund, the Trust has made a formal legal offer to buy the iconic buildings and appointed renowned architect Richard Murphy OBE to develop designs to restore the site as a school, alongside conservation architects Simpson & Brown.

With overwhelming community support for its initial plans following two public consultation events, the Trust now intends to submit a detailed and fully funded application to the City of Edinburgh Council as soon as possible.

Making the announcement alongside Dr Kenneth Taylor, headteacher of St Mary’s Music School, William Gray Muir, the Chairman of the Trust, confirmed that a bid to purchase the Old Royal High School for £1.5m had been made, exceeding the value currently put on the buildings by the City of Edinburgh Council.  This is a small part of a substantial funding pledge which has been made to the Trust to underwrite the cost of a conservation and conversion that respects the buildings’ original character, historic significance and location to secure their long-term future.

The project will represent one of the single largest philanthropic arts gifts in modern Scottish history.

“The Old Royal High School buildings are crucial to the character of Edinburgh and part of the architectural heritage that attracts people to this wonderful city. The Trust was set up specifically to conserve and protect this masterpiece for the long-term and what better way than to restore it to its original purpose as a school?

“St Mary’s Music School needs a new home and if we are successful, not only will this move ensure the School will have more teaching and performance space but as a new venue and destination for talented musicians it will also create opportunity to add to Edinburgh’s cultural economy.”

“We are delighted to have persuaded Richard Murphy to take on this project. Richard’s architectural practice is vastly experienced in both arts and education buildings and is the ideal partner for such an important project.

“The community response that our proposals have so far received has been phenomenal, with almost 100% of people surveyed at two public events telling us that they support the Trust’s vision for the old Royal High School.  We will continue to consult as part of this process and plan to present an update on our designs within weeks.”

Richard Murphy Architects have expressed delight to have been appointed by The Royal High School Preservation Trust to design a new home for the St Mary’s Music School on the site of the former Royal High School.

Richard Murphy’s reputation for sensitively combining new and old has been founded on his own continuing academic explorations into the work of the Venetian architect Carlo Scarpa as well as on a number of significant completed projects. The conversions of the category A listed Tolbooth in Stirling, the Eastgate theatre in Peebles and the John Muir Birthplace Centre in Dunbar are just three examples. Forthcoming is the conversion of the category A Donaldson’s School, the placing of new apartments in the grounds, the radical extension to the listed Carnegie library to form a new arts and heritage centre in the heart of Dunfermline's historic core, and a new foyer and studio theatre to the historic auditorium of Perth theatre. Just complete is the placing of a golf museum cafe on a prominent site adjacent to the R and A clubhouse in St Andrews.

The consistently high standards of the practice's varied work have been recognised by the RIBA who have awarded the practice no less than twenty of their awards, more than any other Scottish practice.

“This is a wonderful site, an exceptionally important building and a delightful client and brief; what architect could not relish such a prospect? We look forward to working closely with the Trust, the School and the rest of the design team."

Simpson & Brown has advised on the conservation of some of Scotland’s most prominent historic buildings including the National Portrait Gallery, Register House, Old College Quad and the National Galleries – which could be considered, along with the Royal High School, as part of the character of Edinburgh as the Athens of the North.  Simpson & Brown often work in collaboration with other architects to understand the history and significance of architectural heritage.

“We have enjoyed working together with Richard Murphy on previous projects and the Royal High School project is a wonderful opportunity to combine creativity with scholarship.”

“This is an exciting and wonderful opportunity for us to further develop Scotland’s only independent specialist music school. Moving to the former Royal High School building would provide us with the performance and rehearsal space we aspire to and would enable us to broaden and extend the outreach activities we currently offer to the wider community.”

The Trust is chaired by William Gray Muir, a Trustee of both Edinburgh World Heritage Trust and the Penicuik House Preservation Trust. His business specialises in finding new uses for historic buildings.

Richard Austin, WS is a Trustee of the Architectural Heritage Society of Scotland and a former pupil of the Royal High School.

Ray Entwistle is Chairman of Hampden and Co, which has recently opened its doors in Charlotte Square and the St James’s area in London. He is a former Chairman of the Scottish Civic Trust which annually, through My Place Awards, has rewarded local organisations that have organised restoration of listed buildings in Scotland for ongoing sustainable use by the community.

Carol Colburn Grigor is an American philanthropist and former concert pianist.  Through Dunard Fund, her family’s charitable giving is focused on music, heritage and the environment.  Mrs Grigor has received recognition for cultural achievements as a Commander of the British Empire (CBE), a Prince of Wales Medal for Philanthropy and the Chevalier de l’Ordre des Arts et des Lettres.

Colin Liddell is an accredited specialist in Charity Law and his firm, J. & H. Mitchell W.S. of Pitlochry, provides a full range of legal services particularly for charities throughout Scotland.  He is Chair of Pitlochry Festival Theatre and a Trustee of a number of other charities.

Peter Thierfeldt is a Trustee of Dunard Fund and Edinburgh World Heritage Trust.  His firm, Partnership Matters, provides management and fundraising consultancy for cultural, educational and heritage charities across the UK.

Entry to the school is by audition and assessment, based on musical ability and potential, regardless of personal financial circumstances.  Scottish Government funding, up to 100 per cent, is available through the Aided Places Scheme to assist with the cost of tuition and boarding fees. In addition, Cathedral funding is available for choristers.

The school has outgrown its Grosvenor Crescent premises and is currently actively considering whether to extend its existing building or move elsewhere in Edinburgh.