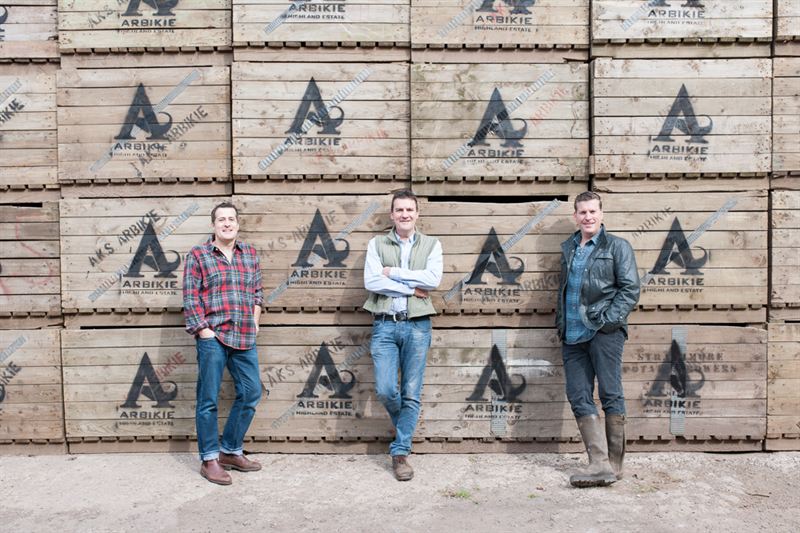 Arbikie Vodka is the initial spirit to be produced at the new distillery, with whisky and gin to follow early in 2015.  It is the first distillery in Scotland to produce both white and brown spirits that will grow all its own ingredients, ferment, distil, bottle, label and mature on site.

Slightly sweet, very creamy and exceptionally smooth, Arbikie Vodka is distilled to a very specific level for a unique taste. It is created using clear Scottish water and a blend of three distinct and flavoursome potatoes: Maris Piper, King Edwards and Cultra.

Unlike the majority of vodka, which is made with wheat, the Arbikie brand is distilled from potatoes, giving it a distinctive flavour, as well as making it gluten free. The distillery is reviving the traditions of an industry which took place on the site back in the 18th century. It uses copper pot stills to bring the time-honoured art of Scotch whisky distilling to the production of all its spirits, giving Arbikie Vodka a comparable quality and depth to Scotch.

Aimed at the discerning vodka drinker, Arbikie Vodka is made to enjoy simply with ice, but is also spectacular as the basis for an iconic Martini. It retails at £42 per bottle and is available UK-wide through major retail outlets distributed by Gordon and MacPhail.

Owned by the Stirling family, which has been farming there for four generations, Arbikie Distillery is part of the Arbikie Highland Estate. The single estate distillery, overlooking Lunan Bay on the Angus coast, grows the raw ingredients, distils and bottles its spirits on site, giving each spirit a premium, nurtured quality.

As a family-run business, the Stirling brothers appreciate the ability to have total control of the process from start to finish and being able to ensure first-class excellence of all ingredients.

“Scotland is a small country but with a world class drinks industry.  We saw a real opportunity to utilise Scotland’s acclaimed natural assets from its clear waters, rich crops and temperamental climate, alongside its renowned whisky heritage, to produce a new generation of exceptional quality spirits.

“As a family business, it is wonderful to have the freedom to be innovative. We believe that drinking should be no different than the way we eat, goodness from the ground up, from the farm to bottle. We have embraced the French concept of ‘terroir’, which describes how the natural elements of a place determine the characteristics of wine, to create exceptional spirits.

“Arbikie Vodka has a distinctive taste with the quality and passion of a whisky.  We believe it will be a popular choice for discerning drinkers who are looking for exceptional quality and integrity of product.”

The Stirling brothers bring together a formidable skill-set of expertise in the drinks industry, commerce and finance.  Recognising the ability of the 2000-acre family farm and the natural resources of Scotland to provide top quality raw ingredients, the brothers decided to establish a unique farm-to-bottle distillery.

Joining John Stirling, Finance and Operations Director, Iain Stirling Commercial Director and David Stirling, Brand Director is Audrey Ramsay as Managing Director.  Within the management team of four, there is over 50 years of drinks manufacturing experience, with Audrey and Iain having held senior positions with Diageo, Whyte & Mackay and Jim Bean. David is a founding partner of two acclaimed New York restaurants and John, a chartered accountant, leads finance and procurement.

Arbikie’s Master Distiller, Kirsty Black, while only thirty-three years old, has already achieved a stellar career path.  She achieved her Masters degree in brewing and distilling with distinction and was also recognised as “best in class” by the Worshipful Company of Brewers.  Kirsty has a breadth of industry experience, having worked at the Caledonian Brewery producing Deuchars, as well as in a leading micro-brewery and helping to create Pickerings Gin.

Arbikie Vodka is distributed throughout the United Kingdom by Gordon and MacPhail and is also available from www.arbikie.com.  A list of where Arbikie will be available in major retail outlets is on the website and will be updated on an on-going basis.

Arbikie Distillery can be found on the following: