Naava aims to get listed – preparing with crowdfunding 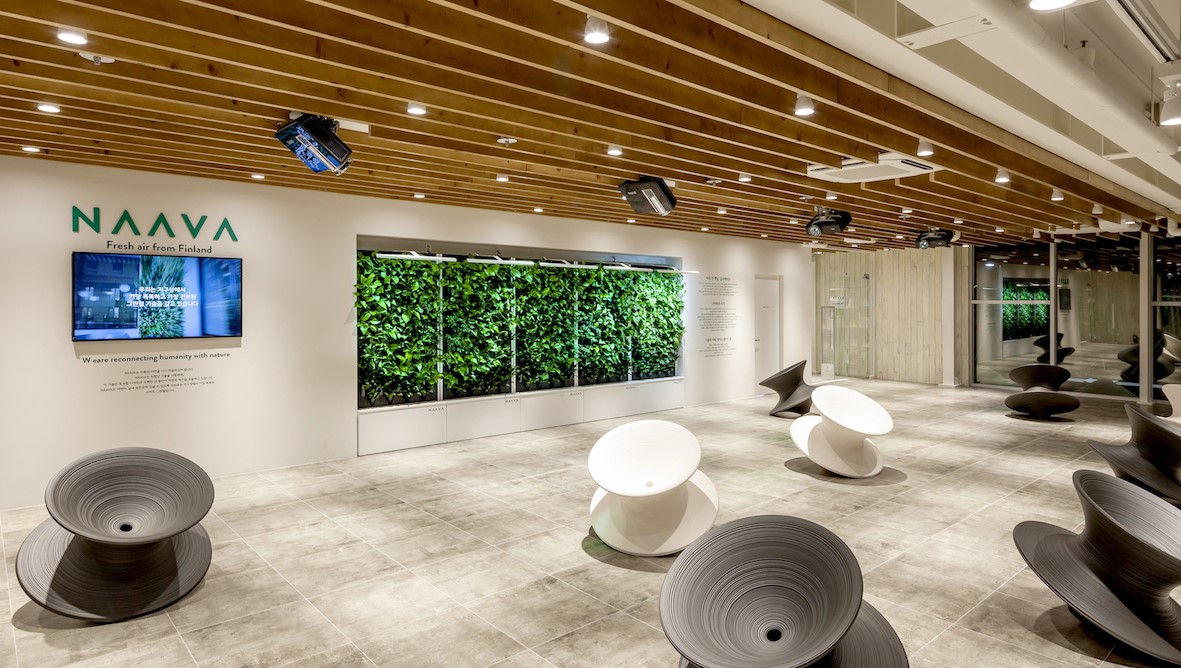 Press release 27 Nov 2018 – Naava is a Nordic healthtech company that is revolutionizing three markets with its furniture innovation that combines nature, technology and design. The company is now looking to raise €2.5 million for expansion through the award-winning Finnish Invesdor crowdfunding platform.

Naava is the global leader in intelligent green walls. Already more than 2 000 Naava green walls have been delivered to the Nordic countries, the US and most recently to South Korea. Naava now plans to expand its operations globally, especially in the world’s megacities. According to Inc. Magazine, Naava is one of the fastest-growing companies in Europe with sales reaching €3 million in 2017, out of which 30% was recurring service revenue. With its unique innovation, Naava is revolutionizing three global markets: the $9 billion interior landscaping market, the $29 billion air purification market and the $50 billion office furniture market.

“As urbanization picks up speed, we want to offer people living in the world’s metropolises the chance to breathe clean natural air with the help of Naava’s technology. Poor indoor air has severe harmful effects on the health of millions of people every day. Naava believes that healthy air should be a human right. The air we breathe will be the next global health trend, right after food and water,” says co-founder and CEO of Naava Aki Soudunsaari.

The crowdfunding is part of the pre-IPO funding round, which aims to strengthen Naava's business and growth prior to the intended listing in 2020–2021. The risks of pre-IPO investments are higher than when investing in stocks, but higher risks also mean higher potential returns.

“The majority of company growth occurs before stock listing. It is often too late to get involved through the stock exchange, which is why investments made before the intended listing are especially interesting for investors,” says CEO of Invesdor Lasse Mäkelä. “Naava has already shown strong signs of market validation and growth, so this is not a startup investment.”

During the funding round, Naava and Invesdor will work in cooperation with Nordea.

“We have successfully worked with Nordea ever since Naava was born. There is no reason to change a good thing, so we will now continue our cooperation also during the Invesdor crowdfunding round. The support from Nordea and Invesdor is crucial to us as we aim for stock listing,” says Aki Soudunsaari.

Read more in the extensive company profile https://www.invesdor.com/fi/pitches/963 (register into Invesdor to see the full material)

Naava is a Finnish health technology company founded in 2012 to reconnect humanity with nature in the built environment. We develop intelligent Naava green wall furniture products, which bring the benefits of nature indoors. Naava is more than a beautiful living wall: it’s also an efficient biological air purifier, humidifier and space divider. Wherever you are should always feel like a walk in the park. Indoors too. All you have to do is: breathe. naava.io

A financial technology (fintech) company founded in Finland in 2012, Invesdor operates an online investment platform that connects ambitious European growth companies with investors worldwide. Invesdor has helped raise more than 64 million euros for more than 130 businesses. Its clients include private and publicly traded companies from Finland, Sweden, Norway, Denmark and the UK as well as investors from more than 80 countries. Invesdor has offices in Helsinki and Stockholm. https://invesdor.com