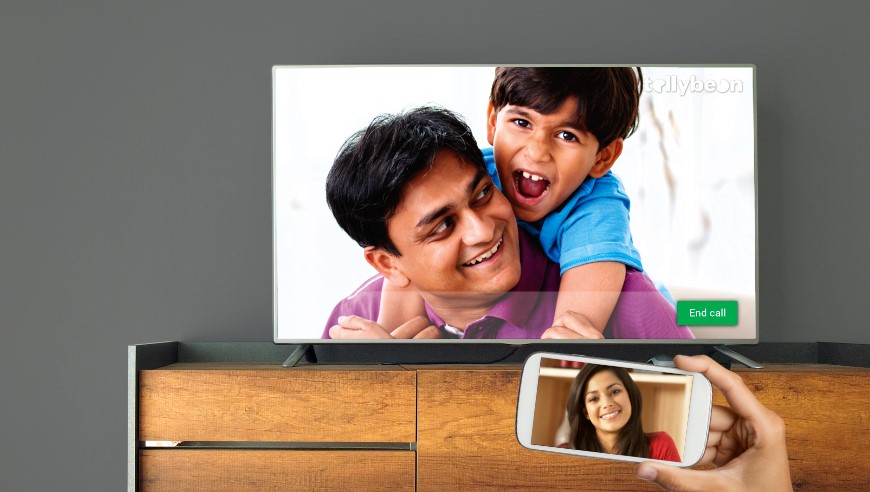 HELSINKI 14.3.2017 – Tellybean, the winner of the Best Smart TV App award, launches crowdfunding campaign on Invesdor to fund its global rollout and user acquisition, as well as expansion to new TV platforms. More information is available at www.invesdor.com/tellybean.

Tellybean was founded in 2011 to solve a personal problem: a grandmother wanted to be with her two grandsons more often, but she was in Australia and they were in Finland. It soon became clear that others had the same problem, even people living very close to each other. Video calling provided the best solution and sitting the whole family on the couch with grandma life-sized on TV was the most natural way to do calls. But there was no simple way of doing this.

The winning solution was found in early 2016 when Tellybean launched an app to turn a mobile phone into a wireless webcam for a video call on TV. This innovatively solved the main challenges with video calling on TV. The service won the Best Smart TV App award at TV Connect 2016 in London and convinced Sony and Philips to enter into partnerships with Tellybean.

Tellybean is the leading video calling service for Smart TVs and set-top boxes. In addition to enabling video calls on TV, Tellybean also works on mobiles and computers. Tellybean launched its service on the Android TV platform in 2015. Now Tellybean is preparing to launch a second TV app, which works on new Samsung and LG TVs.

”Skype showed millions of users and all the large TV manufacturers that video calling on TV is great. After Skype no longer supports TVs, Tellybean fills a void and allows thousands of happy users to enjoy rich interaction with far away family members. Our distribution strategy based on close co-operation with partners, such as Sony and Philips, has proven to be very cost-effective and scalable,” says Cami Hongell, Tellybean's CEO and Co-founder. ”The potential is huge. We target to be available on 500 million TVs by 2019. The crowdfunding campaign will provide us with growth funding and supports our marketing efforts,” continues Hongell.

Tellybean launches its crowdfunding campaign today on Invesdor and the campaign is open until April 11th. The minimum investment is only 750 euros and the targeted round size is at least 375,000 euros. The majority of the shares has already been subscribed for during the two week hidden phase preceding the public launch. The campaign maximum is 700,000 euros.

“It’s extremely interesting to see Tellybean riding the wave of change in how people communicate. Both voice and video calling is shifting from traditional telephone networks to the internet. Tellybean's innovative technological solution as well as strong position in the market makes them well situated for this change,” says Lasse Mäkelä, CEO and co-founder of Invesdor.

Tellybean is driven by a few simple but powerful observations: modern life separates families and technology usually makes video calling inaccessible to the whole family. To solve this problem, Tellybean delivers a life-sized video call experience that the whole family can enjoy. Tellybean's service works on compatible Smart TVs and set-top boxes, on computers and on mobile phones and tablets. Tellybean was founded in 2011 and is based in Helsinki, Finland. Tellybean received recognition and awards as the Best Smart TV App at TV Connect 2016 in London and as the most innovative app in Philips’ Android TV app competition 2016. www.tellybean.com

Invesdor's clients include private and publicly traded companies from Finland, the UK, Norway and Denmark as well as investors from more than 50 countries. Invesdor has offices in London and Helsinki.