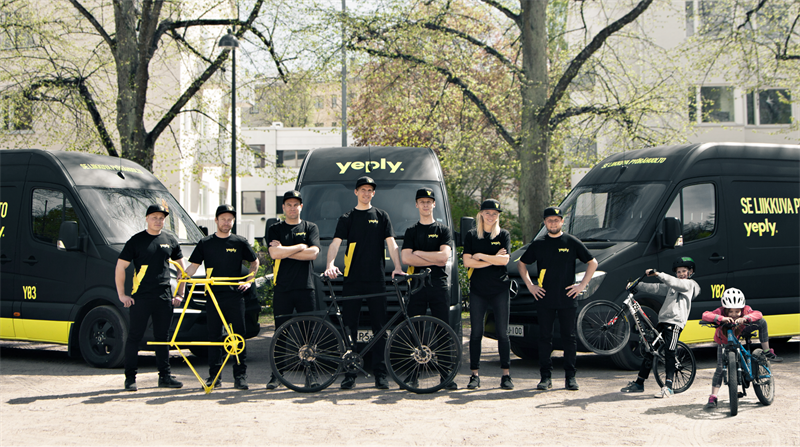 Helsinki 21 Nov 2018 – Yeply, a Finnish startup company taking the pain out of bicycle repairs with its ‘ice cream van operating model’, is taking a big step in its mission of revolutionizing the bicycle repair industry. Yeply has launched a crowdfunding campaign with Invesdor to enable the expansion of its service to the German market.

Yeply's unique concept of mobile bicycle repair shops targets the bicycle repair market of bikes which are not serviced today, eliminating the pain that repairing a bike can be. The existing bicycle maintenance market is estimated by NPD Group, a research company, to be around €10b of which 36% is in Europe.

In addition to the tapped €10 billion market, there is an estimated untapped market of two billion unmaintained bicycles in the world. The market is estimated to grow extensively, supported by many large social trends such as green and ecological values as well as healthy and active lifestyles.

Yeply – Your bike shop on wheels

Yeply’s mobile bike shop has proven to be a success during the first two years of operation in Finland. Yeply grew 402% during 2017 and ran successful pilot projects in in Germany and Holland.

“We’re super focused and driven to make Yeply the biggest and best bike repair shop in Europe by 2022. This equity issue is a crucial step in achieving that goal,” says Tommi Särkkinen, Chairman of the Board at Yeply.

In 2018, after servicing nearly 6,000 bikes in the Greater Helsinki metropolitan area, organizing over 50 B2B service days, having attained a 4.9 star rating in Facebook reviews and being recognized by multiple influential Nordic media, such as Kauppalehti and Hufvudstadsbladet, the concept is finally ready to be launched across markets in Europe.

In the crowdfunding campaign Yeply seeks funding in the range of €200,000 to €300,000. The campaign has rocketed with over 50% of the minimum target achieved after the first day of the funding round being public.

“With the funding received, we will open a 3-van unit in Hamburg, Germany and have the first franchisee up and running in Tampere, Finland,” states Antti Känsälä, co-founder of Yeply.

About Yeply - your mobile bikeshop
Yeply is a Finnish mobile bikeshop, founded in 2016. Yeply challenges boldly the traditional bicycle repair industry. The bikeshop is put on wheels and operated like the classic ice cream van, driving from neighbourhood to neighbourhood, serving both consumers and businesses. https://yeply.fi/

Invesdor in brief
A financial technology (fintech) company founded in Finland in 2012, Invesdor operates an online investment platform that connects ambitious European growth companies with investors worldwide. Invesdor has helped raise more than 60 million euros for more than 130 businesses. Its clients include private and publicly traded companies from Finland, Sweden, Norway, Denmark and the UK as well as investors from more than 80 countries. Invesdor has offices in Helsinki and Stockholm. https://invesdor.com