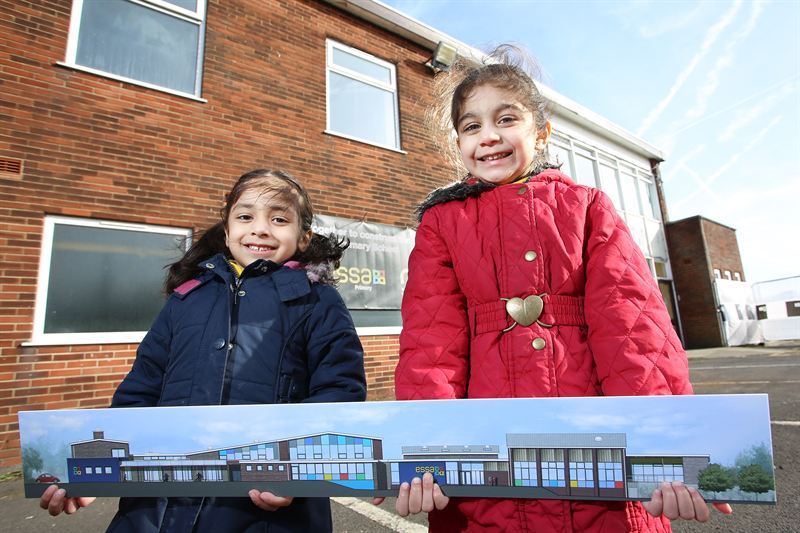 ISG has marked the official start on site of a key regional education project with staff and pupils from Essa Primary School in Bolton. The £2.4 million scheme to create a permanent home for the new Free School was awarded to ISG by the North West Construction Hub (NWCH) for the Education Funding Authority (EFA).

Pupils from Essa Primary School, were joined by local councillors and supporters of the new school, as well as representatives from ISG to ceremonially mark the start of works on site.

The site is available following the move of the existing Essa Academy 11-16 school to its own new building on an adjacent site. Based in temporary accommodation, Essa Primary School opened its doors to pupils in time for the start of the academic year in September 2014 and is currently offering two full Reception classes and one mixed Year One and Two intake. The main refurbishment and extension project will be completed in time for the new school year in September 2015, creating two-form entry accommodation from nursery through to Year Six.

Essa Primary School has been set up under the Government’s Free School initiative and seeks to provide a new approach to primary education that delivers a creative, engaging and enriching learning experience at the very outset of a pupil’s mainstream educational journey.

Jo Wood, Principal at Essa Primary School commented: “Myself, the staff and children are very excited about the building work being carried out by ISG. We look forward to watching the developments over the coming months and to moving into our permanent home in September 2015. The development of the Essa Campus will allow us to embed the Essa Family with the opportunity for children to benefit from 4-16 education on the same site.”

Paul Henderson, ISG’s Northern education framework director, added: “Today represents a great opportunity for all the key stakeholders in the new Essa Primary School to come together and celebrate this important milestone. This project not only satisfies the growing demand for high-quality primary school places but also regenerates an underused public sector property asset that would otherwise stand vacant.”

ISG Plc is an international construction services company delivering Fit Out, Construction, Engineering Services and Specialist Solutions, operating in 28 countries worldwide. The company works with owners, developers and occupiers in the public and private sector for an extensive range of industries. ISG Plc was established in 1989 and has been quoted on AIM since 1998. Today the company has a turnover of around £1.5 billion.

For further information about ISG please visit our website www.isgplc.com