A DIP IN THE DEAD SEA MAY HELP DIABETES

A new study released by the Ben-Gurion University Health Sciences Faculty may give new hope to diabetes patients. The study, conducted among Type 2 Diabetes patients suggests that a short swim in the salty waters of the Dead Sea, may help reduce blood glucose levels and could help improve the medical conditions of diabetics.

While further studies (and funding) are necessary to conclude these early findings, diabetes patients could eventually be able to control glucose levels without having to take medication, or at the very least, take less of it.

The Dead Sea is known for being a source of relief for several health problems. Black Dead Sea mud and thermo-mineral hot springs ease muscular tensions, improve blood circulation and alleviate rheumatic pain; desert-dry, pollution and pollen-free air that is rich in oxygen, bromine and magnesium may relieve asthma, lung and heart diseases and year-round sunshine, whose harmful UVB rays are filtered through the extra layers of atmosphere offering relief to those suffering from skin diseases such as psoriasis.

At over 400 meters below sea level and with luxury hotels in the Ein Bokek area, the Dead Sea is known as the lowest and largest natural health spa in the world. The Dead Sea is one of the finalists in the New 7 Wonders of Nature campaign, which ends 11.11.11. www.new7wonders.com) 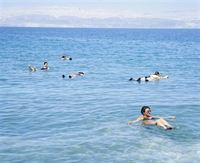