Artist Spencer Tunick has revealed the breathtaking first image from his historic artwork at the Dead Sea. To view the first artwork go to: www.nakedsea.info

“Naked Sea” is a grassroots project initiated in Israel to draw attention to the environmental plight of the Dead Sea. Over 1,200 people from all walks of life (from Israel & abroad) arrived just before dawn on Saturday17th September to participate in the installation. The stunning image was created in only a few hours, after all attendees stripped off and floated in unison in the Dead Sea.

“Israel is not a theocracy it is a democracy and the only place in the Middle East that I could create this art”, said Spencer Tunick. “Thanks to the participants efforts the world has a new image of Israel as an open and vibrant democracy. Israelis are some of the most beautiful, warm, educated, open minded and peaceful people that I have ever worked with”.

Several other images were taken on the shores of the Dead Sea, and later in the day at the Ein Gedi Springs & the Ein Bokek Waterfalls. There were also individual portraits taken in Tel Aviv later in the week of Tunick's visit. The full range of artwork from Israel will be prepared for a future museum exhibition.

“We’re thrilled to reveal the premier image of “Naked Sea”,” said Ari Fruchter & Shlomit Yarkoni, the initiators of the project. “Through the art of Spencer Tunick we were able to reach over 500 million people around the world with a new positive image of Israel and an important environmental message. We look forward to continuing to work with Spencer to prepare a full museum exhibition of his work.” 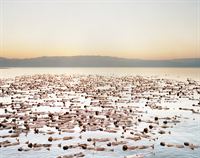