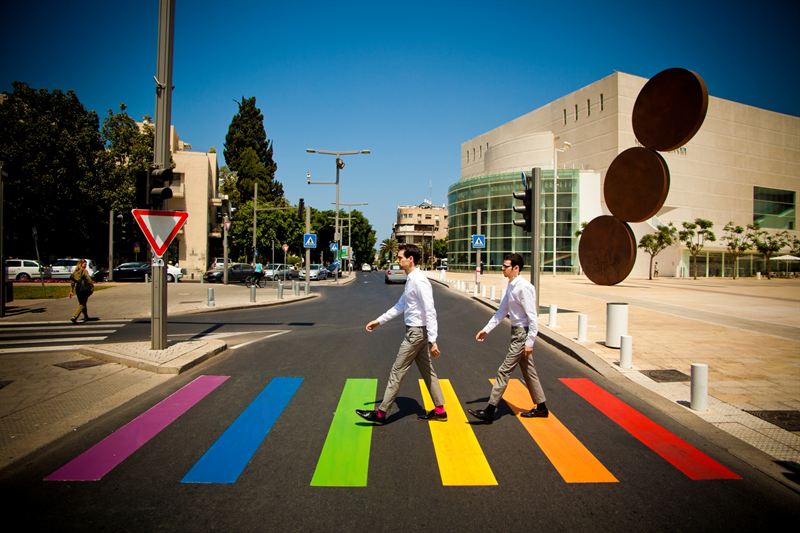 This week Tel Aviv is celebrating Gay Pride on mass, with thousands of tourists flocking to the city from around the globe for the annual parade.

As part of the festive spirit the Tel Aviv municipality has painted a number of zebra crossings in rainbow colors and the popular Hilton beach has been turned into a weeklong gay pride party. The parade will be held on Friday 8thJune, as the highlight of a week full of cultural, art and social activities, as well as parties and events in Tel Aviv, organized by the Tel Aviv-Yafo Municipality and the city’s GLBT community.

With its open, liberal and inclusive atmosphere, its laid-back lifestyle, rich and varied entertainment and beach scene and its sophisticated urban edge, Tel Aviv has carved a place for itself on the international gay tourism map. The 2011 Tel Aviv Gay Pride Parade drew more than 5,000 tourists (an increase of 25% on last year) who joined the 120,000 locals in a colorful and vibrant celebration of freedom, brotherhood and individual rights.  Since 1998, the Tel Aviv Gay Pride Parade has been celebrated every year during the second weekend of the month of June. This year is no exception with record amounts of tourists expected to flock to Tel Aviv for a week of fun in the sun.

Click here to watch a video of the festivities at the Tel Aviv Pride Beach 2012: https://www.youtube.com/watch?v=BPBrN5mEDQg&feature=player_embedded