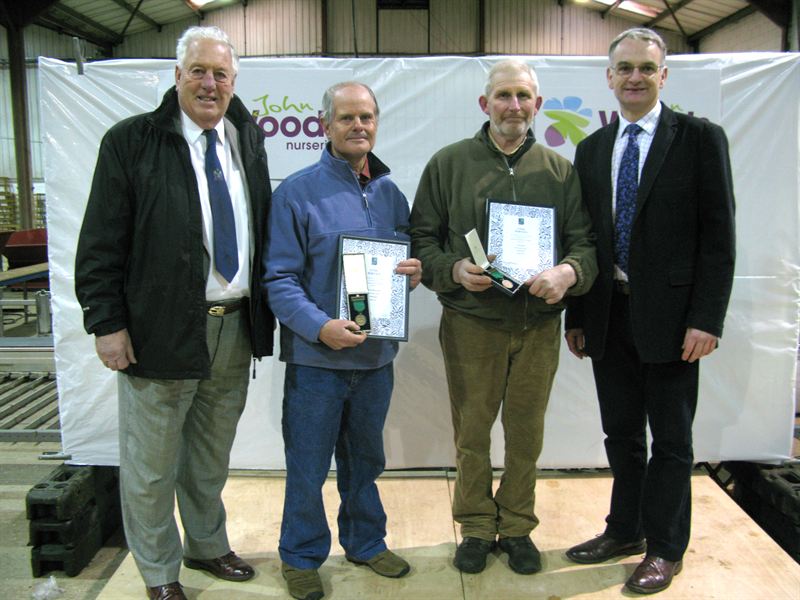 Colin Goddard and Charles Whitfield-King have devoted the best part of their lives to the company after chalking up 80 years' service between them with the Suffolk-based nursery.

John Woods Nurseries, supplier of plants to UK retailers, recently marked the achievements with presentations to the two dedicated members of staff during the company's Christmas get-together which was hosted by Managing Director, John Lord and attended by honorary president, Charles Notcutt.

Colin, who works as a supervisor at Loudham Nursery in Suffolk, joined the company straight from school in 1971, aged 14.

During his distinguished career, Colin became a craftsman in 1978 and a leading hand three years' later before taking responsibility for the whip crop at Hacheston. Colin worked as a chargehand in 1990 and then moved back to the main nursery site in 2005.

To mark 30 years' service, Colin, whose hobby is driving horses, was presented with a long service certificate by HRH Princess Alexander.

Charles joined the nursery two months after Colin, in March 1971, working at the Melton & Ufford Fields. He was an earnest student; his report in the autumn 1972 from the East Suffolk Horticulture Centre stated 'one of the keenest students in the class – a very good effort this term'.

Charles is currently employed as trees supervisor at Loudham. He initially gained his experience of trees under the tutelage of the knowledgeable David Cook while working at Hacheston and then Loudham, before becoming a chargehand in 1995.

A keen photographer, Charles was honoured by HRH Duke of Kent in 1997 for 25 years' service and by HRH Princess Alexandra five years' later for achieving 30 years with the company.

Commenting on the long service awards, John Lord, Managing Director of John Woods Nurseries said, “We are delighted to congratulate and thank Colin and Charles for the excellent service they have given over so many years. Their skills, dedication and loyalty have played a huge part in the success of the company, and they continue to impart with enthusiasm the wealth of knowledge they have built up over the years.”

The original John Woods Nurseries was established in 1837 and purchased by RC Notcutt in 1897. The name was chosen for the new business to reinforce the company’s heritage and authenticity.

John Woods produces hardy nursery stock on a ninety-five acre site in Suffolk. Sixty acres are currently in production, with the remaining thirty-five available for expansion.

The company’s product range extends to 1,500 lines in a range of sizes across shrubs, perennials, roses, ericaceous plants, climbers, trees and fruit. More than 1.3million units are produced annually.

John Woods Nurseries John Woods Nurseries was incorporated in August 2007, following a management buyout of the then Notcutts Nurseries by managing director John Lord and finance director John Kirkum. The original John Woods Nurseries was established in 1837 and purchased by RC Notcutt in 1897. The name was chosen for the new business to reinforce the company’s heritage and authenticity. John Woods produces hardy nursery stock on a ninety-five acre site in Suffolk. Sixty acres are currently in production, with the remaining thirty-five available for expansion. The company’s product range extends to 1,500 lines in a range of sizes across shrubs, perennials, roses, ericaceous plants, climbers, trees and fruit. More than 1.3million units are produced annually. ISO14001 and ISO9001 accredited, John Woods Nurseries is one of the UK’s top five nurseries supplying the garden retail market. Annual turnover is approximately six million pounds. Industry AwardsGarden Retail Awards ’10 - Most Successful New PlantGold Award ’10 - RHS Hampton Court Palace Flower Show 2010Gold Medal ’10 - RHS Chelsea Flower Show 2010 Grower Awards ’09 - Trade Marketing Campaign of the YearGarden Retail Awards ’09 - Most Successful New Plant Grower Awards ’08 - Trade Marketing Campaign of the yearGarden Retail Awards ’08 - Most Successful New Plant Mattocks Mattocks was established in Oxfordshire in 1875. Since then, the company has built a reputation for consistently developing novel, disease-resistant varieties of roses and creating beautiful displays at the RHS Flower Shows at Chelsea and Hampton Court Palace. Mattocks is also responsible for the County® series of roses, flowers developed for – and named after – a number of British counties. A wide range of colours, gentle fragrances and outstanding health properties ensure that all roses in the Mattocks range stand out from the crowd and give excellent garden performance. The company also acts as UK agent for W. Kordes’ Söhne of Germany, one of the world’s most prolific rose breeders. Mattocks is a subsidiary of Suffolk-based John Woods Nurseries, Gold award winner at the RHS Chelsea Flower Show 2010, for its Upwardly Mobile garden feature. The work of Mattock’s has been recognised with a string of awards in recent years, including: Best Rose exhibit Hampton Court Flower Show 2009Gold medal Hampton Court Flowers Show 2009Gold medal Hampton Court Flower Show 2008Rose of The Year 2006 – Champagne Moment Gold Standard Rose trials 2009 – Golden Beauty, Summer BeautyGold Standard Rose trials 2008 – Lancashire, Red Finesse, TemptressGold Standard Rose trials 2006 – Champagne Moment, Silver Ghost Rose Of The Year® and Roses UK Mattocks Joie de Vivre rose won the 2011 ROSE OF THE YEAR® award. Rose Of The Year® was introduced in 1982 and its aim is to discover by trials the best rose(s) in any given year. The prize is awarded by Roses UK, a joint marketing venture between BARB (British Association Of Rose Breeders) and the British Rose Group of the HTA (previously known as the British Rose Growers Association). Rose of the Year® aims to maintain and increase the profile of the nation's favourite flower, the rose, through promotional activities Rose breeders are invited, through Roses UK, to enter what they consider to be the best of their up and coming varieties in to the Rose of the Year competition; generally up to 20 varieties are submitted annually. Staffordshire Society The County® of Staffordshire Rose was bred by Mattocks for the Staffordshire Society. The Society exists to represent the geographical County of Staffordshire (Based on the pre 1974 boundaries) and make people aware of their Staffordshire heritage. Key to achieving these objectives are social gatherings which encourage cordiality and good fellowship amongst its members, and support for worthy causes within the county of Staffordshire. 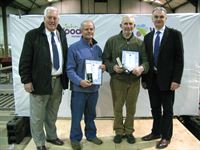 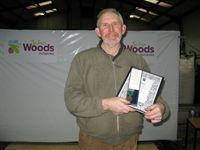 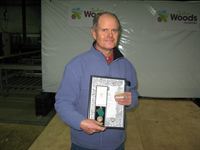