The Nacimientos Project is the Company’s newest exploration project and is a district-scale land package that extends over approximately 15,000 hectares and covers at least six distinct porphyry copper-gold and epithermal gold targets. The project area is located approximately 80 kilometres south of Barrick Gold’s Veladero Mine and is within a possible extension of the prolific El Indio-Veladero gold belt that hosts past production and current resources of more than 50 million ounces of gold (see Figure 1). Project logistics are excellent, and the site is approximately an hour’s drive on dirt roads from a paved highway and small town.

Three diamond drill holes were completed in April 2018, during the last few weeks of the field season. The holes provided an initial test of three out of six target areas identified earlier this year. Two holes, NADH001 and NADH003, confirmed the presence of extensive porphyry copper-gold mineralization associated with an open ended 4 x 2 kilometre copper-gold anomaly. A third hole, NADH002, confirmed the presence of epithermal alteration under unaltered cover rocks (see Figure 2). All three scout holes tested multi-kilometre scale targets and were intended to prove geological concepts rather than to be definitive tests.

Commenting on the results from Nacimientos, Wojtek Wodzicki President and CEO of NGEx stated; “We are very encouraged by these early results from Nacimientos. This was a quick, end-of-season drill program designed as an initial test of geological concepts which has now confirmed the presence of a significant porphyry copper gold system and a large epithermal system under younger cover rocks. The encouraging results at Nacimientos are an important first step that will guide further exploration that we expect will lead us into the core of the system.”

This initial success has encouraged us to plan further drilling, to better define these zones, test a minimum of three other targets, and to vector into the higher-grade parts of the system. This Phase II work program is scheduled to begin later in the year. 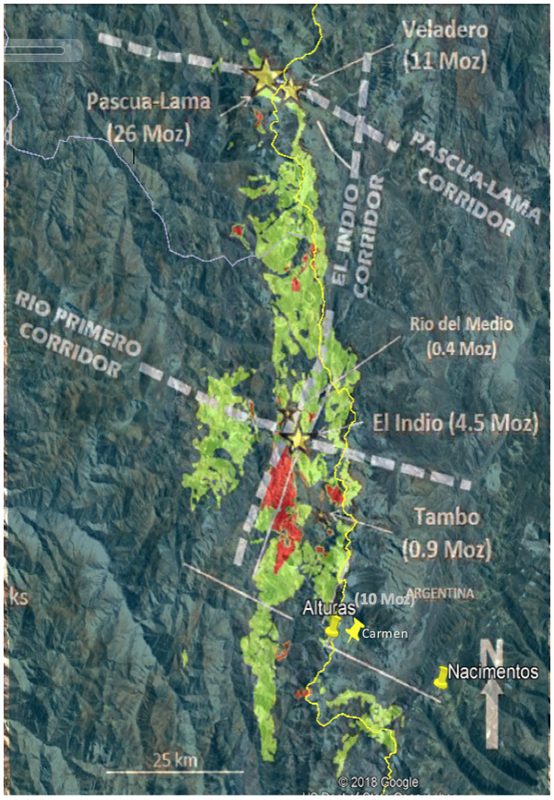 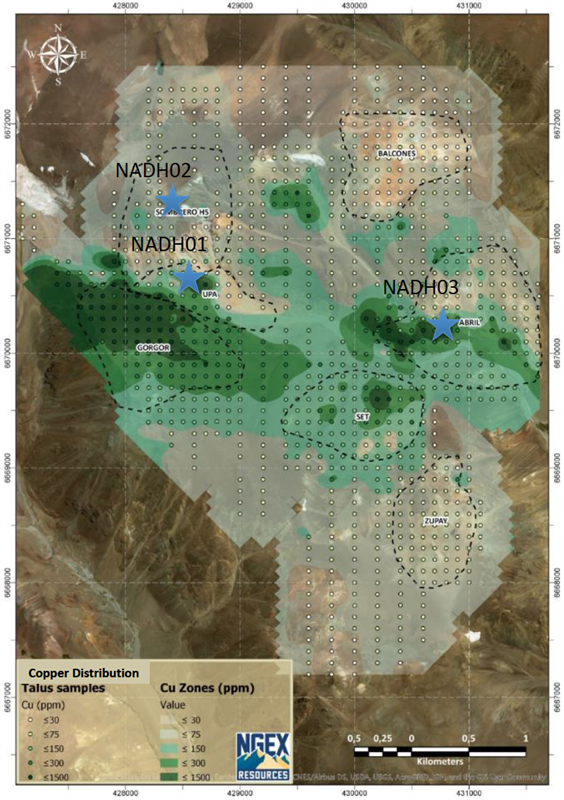 NADH003 was sited at the east end of the copper-gold soil anomaly and intersected 52 metres of 0.40% copper and 0.35 grams/tonne gold for a copper equivalent grade of 0.63% CuEq(1) starting from 16 metres below surface The hole was strongly altered and mineralized from 12 meters to its final depth of 166 metres. Drilling was halted due to the onset of winter weather. This drill hole is interpreted to be on the edge of the system but is encouraging because it confirms the presence of a large, near surface, mineralized copper-gold system. Further drilling is planned for later this year to vector into the core of the system.

NADH002 was drilled to test for the extension under younger cover rocks, of a previously mapped, flat lying zone of massive silica that outcrops on the slope of an elevated plateau area (see Figure 3). Massive silica can be an important feature of epithermal gold deposits because the silica can act as a seal beneath which ponding of gold bearing solutions occurs. The drill hole was located near the geographic center of the plateau and approximately 500m from the nearest outcrop of silica (view PDF). A zone of high resistivity identified in a geophysical survey completed earlier this year, suggested a possible extension of the silica under the cover rocks. The hole drilled through the cover rocks and into massive silica and underlying strongly silicified rocks with highly anomalous levels of epithermal pathfinder elements including mercury, arsenic, and tellurium. This hole is important because it confirms the presence of a large hydrothermal system extending over at least 1 square kilometre, under the cover rocks. Future work will try to vector towards the interpreted gold-rich part of the system. 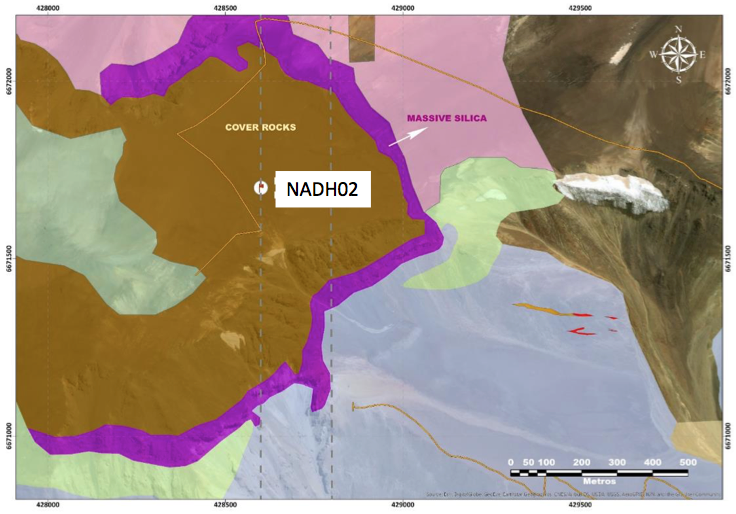 Technical disclosure for the Company's projects included in this press release has been reviewed and approved by Bob Carmichael, P. Eng. (BC). Mr. Carmichael is NGEx's Vice President of Exploration and a Qualified Person ("QP") under National Instrument 43-101 Standards of Disclosure for Mineral Projects (NI 43-101).

The information was submitted for publication, through the agency of the contact person set out below, on June 25, 2018 at 3:15 p.m. Pacific Time.

On behalf of the board

Forward-looking information is provided for the purpose of providing information about management's current expectations and plans and allowing investors and others to get a better understanding of the Company's operating environment. Forward-looking information is based on certain assumptions that the Company believes are reasonable, including that the company will be able to complete the currently planned drill holes before the onset of winter conditions, the current price of and demand for commodities will be sustained or will improve, the supply of commodities will remain stable, that the general business and economic conditions will not change in a material adverse manner, that financing will be available if and when needed on reasonable terms and that the Company will not experience any material labour dispute, accident, or failure drilling equipment. These factors are not, and should not be construed as being, exhaustive.

Forward-looking information is necessarily based on estimates and assumptions that are inherently subject to known and unknown risks, uncertainties and other factors that may cause the actual results, level of activity, performance or achievements of the Company to be materially different from those expressed or implied by such forward-looking information, including but not limited to: risks and uncertainties relating to, among other things, current interpretations of geological targets and potential for mineralization identified on surface to persist at depth or under cover rocks, the ability of drill contractors to reach target depths, as well as other risks and uncertainties more fully described under "Risks Factors" in the Company's Annual Information Form available under the Company's profile at www.sedar.com and the Company's website.

NGEx is a Canadian mineral exploration company with projects in Chile and Argentina. The Company's shares are listed on the TSX and on Nasdaq Stockholm under the symbol "NGQ". The Company's main focus is on advancing the development of its two, large copper/gold deposits, Los Helados and Josemaría, located in Chile's Region III and adjacent San Juan Province, Argentina. The Company owns a 100% interest in the Josemaría project and is the majority partner and operator for the Los Helados project, subject to a Joint Exploration Agreement with its joint exploration partner in Chile, Pan Pacific Copper ("PPC").  The Company is also actively seeking new exploration projects and carrying out earlier stage exploration on projects with large scale potential.