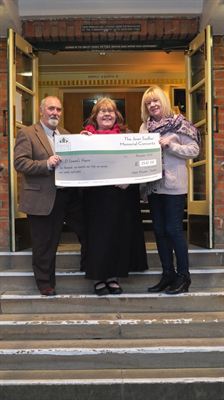 Two shows held at the Joseph Rowntree Theatre in memory of long-time volunteer and supporter, Joan Sadler, have helped raise over £3300 for the charity.

A close friend of Joan’s, Mike Grimes, today joined the theatre’s booking director, Susie Young, in handing over a cheque for £2641.98 to Annie Keogh, fundraiser for St Leonard’s Hospice, which joins £613 in donations collected on the evenings of the two concerts held earlier this year.  The proceeds from the ticket sales were shared equally between the hospice and Joseph Rowntree Theatre.

“Joan would have been absolutely delighted to know that so much money had been raised in her name – it is a perfect tribute to a wonderful lady who spent so much of her life fundraising for these two great causes,” comments Mike.  “Joan always said that she wanted a memorial concert filled with her favourite performers, but she had so many that we had to have two separate nights to accommodate them all!”

“Joan spent countless shows here at the theatre either duty managing, supporting the theatre and the groups who perform here, or sitting in her favourite seat in the audience,” says the theatre’s chair of trustees, Dan Shrimpton.  “We’ve been entrusted with her British Empire Medal, which is on display in the foyer as a tribute to Joan.”

Annie Keogh, corporate fundraiser for St Leonard’s Hospice was delighted to accept the cheque: “This donation is a very fitting tribute to Joan’s energy and enthusiasm for life; Hospice care is about helping our patients have as full a life as they can, right through to their last days.  Thank you to everyone involved in raising such a great sum for our work.”

Joseph Rowntree Theatre is York’s Art Deco theatre. Hosting concerts, plays, shows, pantomimes and musicals for the last 80 years by touring artists, groups and talented local companies, Joseph Rowntree Theatre has some of the most comfortable and roomy seats in York – perfect for relaxing and enjoying the show. All seats across stalls and the balcony have a completely unrestricted view of the stage; even the last ticket on sale guarantees a great seat! Its location on Haxby Road is just over a mile from the city centre, with free parking and public transport stopping outside the gates. Joseph Rowntree Theatre is part of York’s vibrant chocolate heritage, having been built by Joseph Rowntree as a community hall for those working at his confectionary factories, which still surround the theatre today. It continues to be a friendly, vibrant hub of live entertainment to which patrons return time and again. Since 2001 the Theatre has been run by a charitable trust to provide an affordable venue to over 30 performing hirers, thanks to the efforts of its 150 regular volunteers. These volunteers come from all walks of life, be they retired former members of amateur dramatic societies, or youngsters wanting to learn the skills of stage management and the technical aspects of theatre. www.josephrowntreetheatre.co.uk01904 50 1935