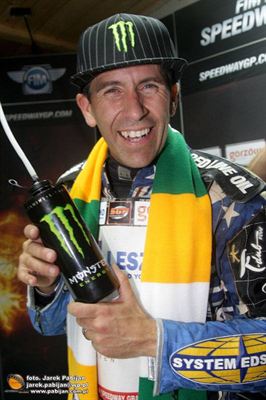 At 41 years old, the lone American in the global motorcycle racing series overcame a knee injury to secure his second World Championship title at the Croatian Grand Prix – making him only the third American to conquer the series in the 75 year history of the sport.

Benicia, Calif. (Sept. 29, 2011) – Greg Hancock, the only American competitor in the Speedway Grand Prix, secured the World Championship title during a heat at the Croatian Grand Prix over the weekend. At the age of 41, Hancock overcame torn ligaments in his left knee to become the oldest world champion in the history of the sport and only the third American rider to win the series in its history.

“It still hasn’t sunk in, I’m feeling so good and I just want to celebrate now, but there are still more races to come this year,” Hancock said. “The adrenaline pretty much took the pain away and I didn’t think about the knee. I’ll pay for it later, but I’m over the moon with this.”

Going into the event with a 31 point lead over Jarek Hampel, the long-time Red Line Oil sponsored rider sealed his victory with a fourth place finish in heat 20 after building up an unrecoverable advantage over Hampel in the points race.

In a sport long dominated by Europeans, Hancock competed in this year’s series as the sole American. Since the inception of the sport in the 1930s – where motorcycles race around a dirt track flat-out without brakes, using body weight to lean into turns - only two other Americans have ever won the World Championship—Jack Milne in 1937 and famed racer Bruce Penhall in 1981 and 1982. After winning the event in 1997, Hancock matched Penhall’s two-win record by winning again fourteen years later.

On October 8, Hancock will end his Grand Prix season with the FIM Enea Gorzow SGP of Poland, where he will be presented with the brand-new World Championship trophy. Despite already being the champion twice over, Hancock is hoping to claim another gold medal to his 2011 season at this final event.