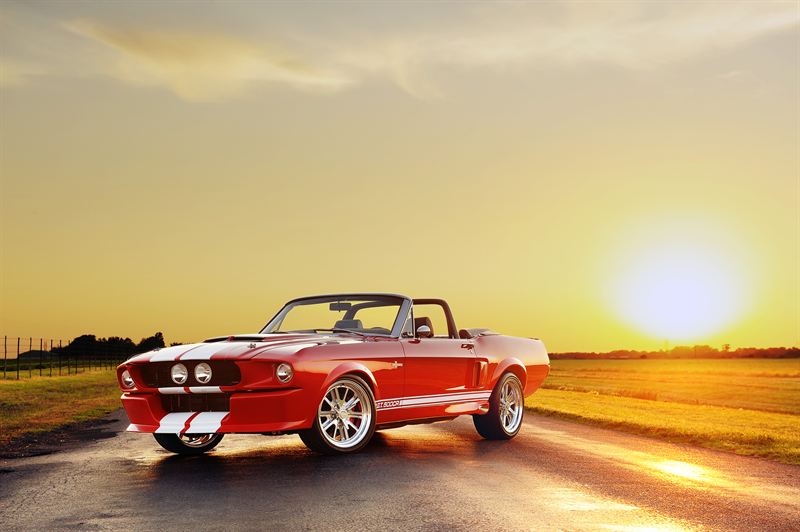 Yukon, Okla. (June 22, 2012) –Never officially built with only one prototype car known to exist, the 1967 Shelby G.T.500 convertible is one of the rarest and most sought after collector cars of the 1960s. The debut of the Classic Recreations G.T.500CR convertible gives enthusiasts a new option, one that is bittersweet as the G.T.500CR convertible was the final Classic Recreations cars to receive Carroll Shelby’s seal of approval before his passing.

The G.T.500CR is the only officially licensed 1967 Shelby Mustang in production, and all G.T.500CR models feature a hand-built 427 cubic inch (7.0L) engine, modern performance suspension, model specific bodywork, custom paint and hand-stitched upholstery. Every car comes with an official Shelby serial number, badges and is included in the official Shelby Worldwide Registry.

The G.T.500CR 900S model has all the features of the 545 model plus boosted power to 780hp with an F1-R Intercooled ProCharger supercharged engine. Other upgrades include a 200mph speedometer and racing-style bucket seats. The 900S also boasts suspension and chassis upgrades as well as 17x11" rear wheels and wider ultra high performance Goodyear tires. All G.T.500CR convertibles will include a hand-stitched power top.

Classic Recreations founder Jason Engel, and his company’s team skilled technicians and craftsmen, have been modifying and custom fabricating high-performance vehicles for more than 10 years. Each built-to-order vehicle takes approximately four months (nearly 2,500 man hours) of painstaking assembly. Find out more about how to get your own customized vehicle at www.1967fastback.com.