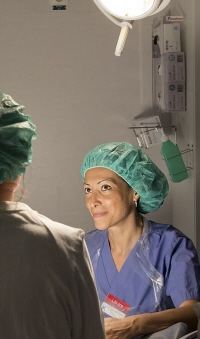 Yesterday for the first time in Sweden a child was born to a woman who was the recipient of transplantation with her own ovarian tissue. This event occurred after a team at Karolinska University Hospital reimplanted a portion of ovary that had been cryopreserved.

The woman had been offered the opportunity to preserve tissue from one ovary for the purpose of preserving fertility prior to initiation of cancer treatment. Following this treatment her ovarian function was permanently destroyed. The re-implanted portion of ovarian tissue was able to re-establish a normal hormonal cycle and also had intact oocytes. Subsequently the woman and her partner underwent in vitro fertilization (IVF) treatment and she became pregnant on the very first IVF attempt at the Reproductive Medicine division at Karolinska. Yesterday she gave birth to a healthy baby at Mälarsjukhuset Hospital, Eskilstuna.

At age 23 this woman developed a rare form of cancer, Ewing's sarcoma. The tumor was located deep in the pelvis and doctors were forced to treat her with both radiation therapy and high dose chemotherapy. Immediately prior to initiation of her treatment, her oncologist suggested cryopreserving ovarian tissue to provide her with a chance to isolate viable eggs that could be fertilized. During the procedure, doctors were able to remove healthy ovarian tissue that was immediately frozen in liquid nitrogen. As expected, 10 months of radiotherapy and chemotherapy immediately resulted in cessation of ovarian hormone production and eliminated the chance of pregnancy.

The patient, who was cured by her cancer treatment, has lived a completely normal life for more than ten years, but harbored a desire to start a family with her ​​husband. In the summer of 2012 her team of doctors, under the leadership of Kenny Rodriguez-Wallberg at the Department of Obstetrics and Gynecology, Karolinska University Hospital, defrosted her ovarian tissue and performed an autologous transplantation to several different locations in the pelvis. Subsequently, at the Reproductive Medicine division, Karolinska, doctors were able to use hormone injections to stimulate the patient and produce mature egg cells, after which they carried out in vitro fertilization (IVF); happily, she became pregnant with the very first attempt to implant an embryo.

“This event is a major advance that opens up new possibilities for young women who have been afflicted with cancer to have their own children,” says Jan Olofsson, medical director, Reproductive Medicine, Karolinska University Hospital.