Keliber Oy (“the Company”) has completed the definitive feasibility study (“DFS”) on its Lithium Project (“Project”), with the results confirming the Project’s strong financial and technical feasibility. The received results form a firm base for the further development of the Company as the first European vertically integrated battery grade lithium carbonate producer to meet the expected growing demand for high-quality lithium raw materials over the next decades.

Based on current ore reserves the life of mines is 13 years. The project is extended to 20 years by purchasing spodumene concentrates from third parties for 7 years after the mines are exhausted. There exists significant exploration potential in the area giving the possibility to continue the operation from own reserves.

The DFS of Keliber’s Lithium Project shows a pre-tax NPV (8% discount) of MEUR 295, a pre-tax IRR of 24% and payback period of 5.5 years. The Project has potential to generate total life of operations revenues of MEUR 2,281 and operating cash flow (EBITDA) of MEUR 1,213.

The total project development capital cost (“CAPEX”) estimate for the mines, concentrator and chemical plant is MEUR 255. The initial investment is MEUR 199 and the remaining MEUR 56 will be invested later.

Highlights of the DFS outcomes are provided below. All figures are quoted in euros (EUR, €), unless otherwise specified. The exchange rate used in the calculations is 1.00 € = 1.21 US$. 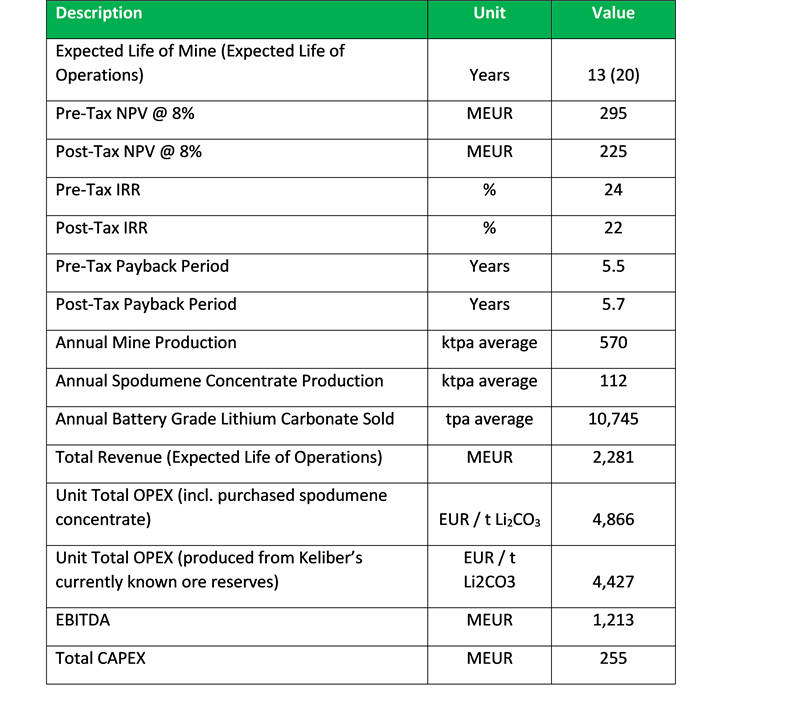 "I am confident that the strong economics of the definitive feasibility study will positively impact the further development of our Lithium Project. The successful completion of the DFS is a crucial milestone and will form a strong base for the company to become the first vertically integrated European lithium producer located near the fast-developing European lithium markets. The market for lithium products is extremely strong and demand is forecast to grow rapidly throughout the next decade. At the beginning of the 2030s, lithium consumption is estimated to be seven times higher than current consumption. The feasibility study will provide a good basis for our further discussions with customers and financial institutions and we believe that our efficient and environmentally-friendly clean-tech production process plays important role in project realization,” says Keliber Oy’s CEO Mr. Pertti Lamberg.

The mineral resources have been estimated and reported in accordance with the guidelines of the Australasian Code for the Reporting of Mineral Resources and Ore Reserves (JORC Code 2012) by the independent Competent Persons Markku Meriläinen (MAusIMM) and Pekka Loven (MAusIMM, CP).

The company’s new and significantly increased ore reserve estimates are prepared according to the 2012 edition of the Australasian Code for Reporting of Mineral Resources and Ore Reserves (JORC Code 2012). The DFS outlines a combined open pit and underground mining. The combined open pit and underground proven and probable reserves, using a 0.45% Li₂O cut-off grade for open pit reserves and a 0.7% Li₂O cut-off grade for underground reserves, are 7.408 Mt grading at 1.04% Li₂O. A summary of estimated ore reserves of the individual deposits is shown in the following table. 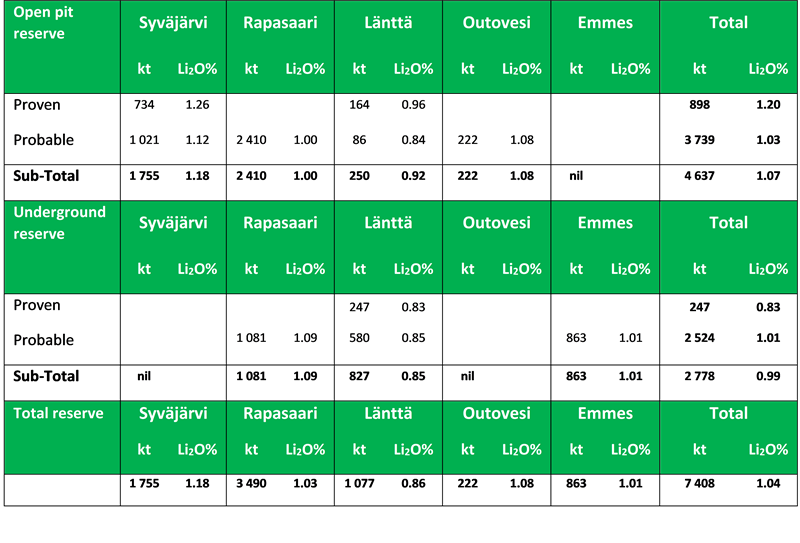 Ore Reserves are included in the Mineral Resources.

The ore reserve estimates have been prepared according to the guidelines of the JORC Code 2012 by Pöyry Finland Oy by competent persons under the supervision of Ville-Matti Seppä MSc (Geology), EurGeol acting as the qualified person.

“We are pleased with the significant increase in both mineral resources and ore reserves. Growing resources and reserves are the result of systematic exploration and diamond drilling and show the existing ore potential of the Central Ostrobothnian lithium province. We are confident there will be further resource increase also in the future, and at the same time as we are progressing towards construction stage, we will continue the active exploration and resource development work,“ says the company’s Chief Geologist Mr. Pentti Grönholm.

The selected overall flowsheet comprises a conventional spodumene concentrator, conversion of alpha to beta spodumene in a rotary kiln and a soda pressure leach process to produce lithium carbonate. The overall process has been proven at pilot plant scale.

During the efficient and sustainable production of lithium carbonate based on the soda leaching process, two by-products are obtained, namely analcime sand and quartz-feldspar sand, which could potentially have a commercial value. Analcime sand could be used as a construction material, as a fill material at the Port of Kokkola and in water treatment. Test work related to the use of the quartz-feldspar sand as filler material in concrete, mortar, plaster and asphalt has been carried out.

“Our clean-tech soda pressure leaching process is planned and designed in close co-operation with Outotec. We are pleased with the results we have reached from the economic, technological and environmental perspectives. The commercial and environmental benefits we obtain from the chosen processing route are notable. Our planned investment is one of the biggest investments in Central Ostrobothnia for decades. Our future production will directly employ about 140 people, with the multiplier effect on employment being even greater”, says Chief Production Officer of the company, Mr. Manu Myllymäki.

The main purpose of the definitive feasibility study is to qualify the company’s Lithium Project for construction financing. Keliber is progressing with various activities to ensure optimal combination of debt and equity for the Project.

The executive summary of the DFS report, with more detailed information including e.g. assumptions and risks, is enclosed in this release.

Keliber will host an open presentation to be held in Talonpojankatu 6, 67100 Kokkola, on Friday 15th, at 2 p.m. in Finnish and 2.30 p.m. (EEST) in English. The presentation is streamed live at http://live.limetv.fi/keliber_eng.html. We invite investors, analysts and media to attend the presentation.

Video conference to present the definitive feasibility study is followed by a Q&A session. All the questions are requested to be sent via chat. A recording of the video conference and of the Q&A session will be made available on www.keliber.fi/en/ after the conference. 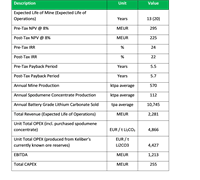