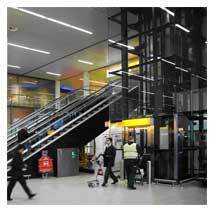 KONE has won two European tenders to deliver 43 eco-efficient elevators and 50 escalators and autowalks for the Amsterdam Airport Schiphol in the Netherlands. The equipment order is part of the airport's project to enable centralized security procedures in its non-Schengen area to replace security at the gates in the future.

Installation is scheduled to begin this year with the equipment fully operational once the new central security filters are opened to the public in 2015.

"We are happy to contribute to the smooth operation of Amsterdam Airport Schiphol. This agreement is a continuation of our cooperation and further strengthens our relationship with them," said Ari Lehtoranta, KONE Executive Vice President for Central and North Europe.

The Amsterdam Airport Schiphol is the Netherlands' main international airport, serving over 51 million passengers yearly. In 2012, it was selected the best airport in Europe for the third time by the Airports Council International (ACI) Europe.

KONE has worked with the Amsterdam Airport Schiphol for more than 40 years. In 2011, KONE was chosen as the main contractor for the maintenance of all escalators, elevators, and automatic doors.

A majority of the order was booked in the first quarter of 2013.

KONE's previously published press releases are available at www.kone.com/press including:

December 7, 2012 KONE to deliver elevators to Oslo Airport in Norway

About KONE
KONE is one of the global leaders in the elevator and escalator industry. The company has been committed to understanding the needs of its customers for the past century, providing industry-leading elevators, escalators and automatic building doors as well as innovative solutions for modernization and maintenance. The company's objective is to offer the best People Flow® experience by developing and delivering solutions that enable people to move smoothly, safely, comfortably and without waiting in buildings in an increasingly urbanizing environment. In 2012, KONE had annual net sales of EUR 6.3 billion and around 40,000 employees. KONE class B shares are listed on the NASDAQ OMX Helsinki Ltd in Finland

At KONE, our mission is to improve the flow of urban life. As a global leader in the elevator and escalator industry, KONE provides elevators, escalators and automatic building doors, as well as solutions for maintenance and modernization to add value to buildings throughout their life cycle. Through more effective People Flow®, we make people's journeys safe, convenient and reliable, in taller, smarter buildings. In 2019, KONE had annual sales of EUR 10 billion, and at the end of the year approximately 60,000 employees. KONE class B shares are listed on the Nasdaq Helsinki Ltd. in Finland. www.kone.com