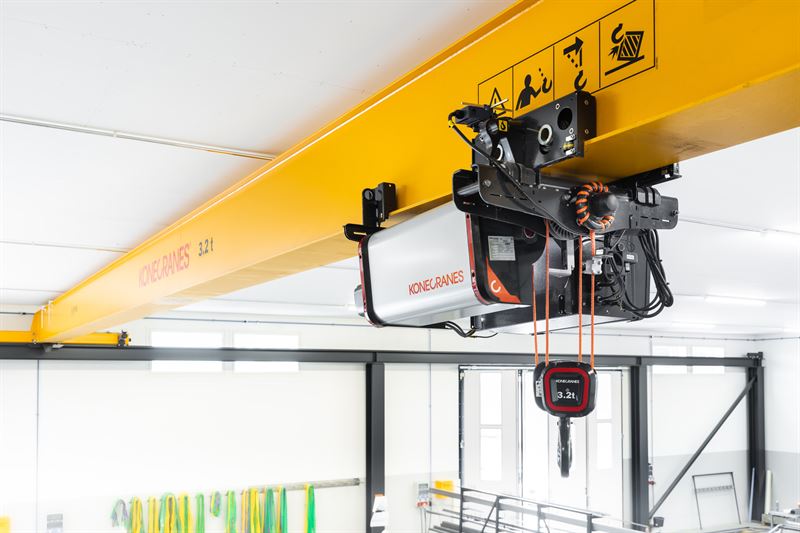 With the introduction of its radically new Konecranes S-series crane, now available in the US and Canada in capacities up to 6.3 tons, the global lifting leader shatters old-school stereotypes of overhead crane design. A product of years of research and bristling with innovations, the Konecranes S-series delivers a long list of tangible benefits that are unduplicated in the lifting industry today.

At the top of this list is the reason Konecranes has dubbed its new crane the “Konecranes S-series.” “S” stands for synthetic rope, which through exhaustive testing has been revealed to be stronger than steel, much cleaner than steel, and significantly safer to handle.

“Intuitively, when someone looks at synthetic rope on a crane there are a lot of questions,” says Edward Di Cesare, director of marketing, industrial crane products for Region Americas. “First, people ask if synthetic rope is strong enough. Second, they ask if it is safe. What we’ve learned is that synthetic rope is actually safer, it outlasts wire rope, and its inherent properties allow us to build a crane that is superior in many ways.”

When exposed to sparks within 20 cm or 8 inches for 45 seconds of grinding operations and then stress-tested, the synthetic rope still exceeded the minimum safety factor of five.

When both ropes were exposed to a sharp edge, the synthetic rope received no permanent deformation or harmful damage, and was approved for use. The wire rope was permanently deformed, which meant that it failed standard inspection criteria, and had to be taken out of use.

In what was probably the most important challenge, a basic breaking strength test with parameters of time, distance and loading, Konecranes synthetic rope was the clear winner.

“Beyond the fact that synthetic rope is stronger, it also has other properties that allow us to build a better crane,” says Di Cesare. “Synthetic rope creates less friction on the drum and sheaves which contributes to less wear. Another advantage is that without the need for oil lubrication the synthetic rope is much cleaner and reduces maintenance, which is an important benefit for many applications.”

Di Cesare noted that while the synthetic rope may get most of the initial attention, the Konecranes S-series delivers many other innovative features, such as its tilted hoist drum.

“The tilted drum is designed to reduce the angle of the rope and provides even weight distribution which results in a stable load. This also extends the lifetime of the reeving components and the rope by keeping it centered in the drum groove,” he said.

Unlike a traditional wire rope hoist, Konecranes S-series’ new reeving design with tilted drum prevents ropes from crossing, and the fleet angles remain straight all the way up to the drum, preventing the block from twisting as it sometimes does on a wire rope hoist.

“Another benefit of Konecranes S-series’ offset reeving is that it improves lifting component lifetime because it centers everything,” says Mark Perepeluk, director of product management and training. “The reduced physical weight of the hoist results in 45 percent less wheel load and virtually no frame twisting. Components also last longer because friction is so low on the synthetic rope and composite sheaves.”

Perepeluk also noted that a substantial part of the weight savings is in the rope, which is 85 percent lighter than a comparable wire rope. He says that customers will appreciate the fact that it is easy to change, and if someone happens to grab the rope while rigging, it is much easier on the hands than steel wire, which typically has barbs due to small broken wires from general use.

Konecranes S-series also features a new hook block design that includes more long wearing composite parts, estimated to last 45 percent longer than steel. And because the rope is made of synthetic material, the drum no longer needs lubrication, reducing maintenance costs for the customer.

Another cutting-edge Konecranes S-series innovation is the main girder, which comes with a first-ever sliding connection that allows the end truck to automatically adjust itself on the runway, reducing wheel and runway wear. It is also easily adjustable in cases of span misalignment or out of tolerance runways.

“The Konecranes S-series represents a major leap forward, but we believe our customers will appreciate another layer of benefits that are integral to this crane,” says Di Cesare. “We have also included some of our most popular Safe Feature software technologies.”

Three standard Safe Features include Snag Prevention, Hook Centering and Follow Me, which help speed up operations while protecting employees and infrastructure.

“Follow Me is a feature where you can move the crane by taking hold of the hook and walking the crane and hoist to the desired location,” says product manager Jussi Luokomaa. “You press the button on the radio and grab the hook and it follows you to wherever you are going. It increases the speed and accuracy of the crane operation significantly.”

Variable speed control for all movements is also standard on Konecranes S-series. It has stepless inverter control for hoisting as well as travel, plus Adaptive Speed Range (ASR) that adjusts the maximum lifting speed to the weight of the load for safer and more productive use. In simple terms, ASR facilitates faster load cycles with lighter loads.

“Konecranes S-series establishes a new benchmark for the overhead industrial crane, but you don’t have to take our word for it,” says Di Cesare. “Bottom line, this is a crane that delivers better lifting performance and longer-lasting use. Customers can track and verify its performance with the included TRUCONNECT® crane usage and operating data platform, viewable at our cloud-based customer portal yourKONECRANES.com.”

PHOTO CAPTION:  Konecranes S-series crane delivers a long list of tangible benefits that are unduplicated in the lifting industry today.

Konecranes is a world-leading group of Lifting Businesses™, serving a broad range of customers, including manufacturing and process industries, shipyards, ports and terminals. Konecranes provides productivity enhancing lifting solutions as well as services for lifting equipment of all makes. In 2019, Group sales totaled EUR 3.33 billion. Including MHE-Demag, the Group has around 18,000 employees in 50 countries. Konecranes shares are listed on the Nasdaq Helsinki (symbol: KCR).