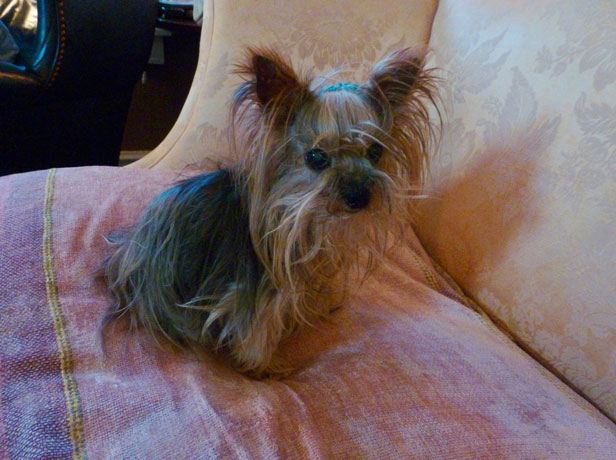 Brea, Calif. (Nov. 27, 2012) — Because of Annie’s diminutive stature, Jean Ann and Ralph Feneis of Middleburg, Va. didn’t let their four-pound Yorkshire terrier outdoors by herself. Unfortunately, after nearly 17 years, Annie found herself stranded and unsupervised outside for the first time during one of the worst thunderstorms in North American history. The terrifying ordeal led to an emergency trip to the animal hospital, and subsequently the amputation of Annie’s right rear leg, earning her the title of “Most Unusual October Claim” by Veterinary Pet Insurance Co. (VPI).

Jean Ann and Ralph left Annie safe and sound inside her home as they went to a dinner party, but three hours later, a system of destructive thunderstorms would devastate the mid-Atlantic region, resulting in deaths, leaving millions of people without power, and nearly taking Annie’s life.

The storm’s vicious wind caused a side door on the Feneis’ house to blow open, and Annie wandered outside just as another large gust came through and slammed the door shut, leaving the petite pooch stranded in the wind and rain. Unfortunately for Jean Ann and Ralph, the storm was also preventing them from coming home to check on Annie’s welfare as trees had fallen into the roads creating traffic hazards and havoc throughout the drive.

At 2:00 a.m., the Feneis’ finally arrived home to find Annie outside nearly drowned and crying as she had wedged her right rear leg in the driveway drain grid. What made the situation worse is that Annie must have panicked when her leg got trapped and she kept pulling away in an attempt to get released, wounding her leg even further as the rain water washed over her.

“She nearly tore her leg off,” explained Jean Ann. “She had broken bones, broken metatarsals, torn tendons and muscles. She was gravely wounded.”

The Feneis’ rushed Annie to the emergency animal hospital, where she was immediately stabilized. She was initially given a good prognosis, but because of the time it would take for her injuries to heal due to her age, the emergency veterinarian recommended the severely injured leg be amputated. After consulting with the animal hospital’s doctors and Annie’s regular veterinarian, Jean Ann and Ralph concluded the best decision was to have the leg amputated.

“At her age, we felt all of the surgeries and long months of pain trying to put her bones back together would be just too cruel,” explained Jean Ann. “The surgeon declared her the healthiest little specimen she had ever seen for being almost 17 years old. Since the surgery, she has been adjusting to life on three legs. She’s still our princess.”

While it is more difficult for Annie to move around the house, she is in good health otherwise, and Jean Ann and Ralph are thankful she was able to pull through following the horrifying incident.

“Disasters can affect us all, including our pets,” said Carol McConnell, DVM, MBA, vice president and chief veterinary medical officer for VPI. “We recommend having a pet evacuation kit that is readily accessible, easy to carry and to ensure it contains essential pet supplies, such as food, water, portable feeding bowls, a collar, pet medications and medical records. Even though the Fenies’ did everything possible to protect Annie, this incident shows that some events are unavoidable. Pet insurance is an effective way to safeguard against unexpected costs that can result from these unimaginable incidents.”

As longtime VPI policyholders, the Feneis’ are pleased with their decision to purchase pet insurance when they brought Annie home as a puppy more than a decade-and-a-half ago.

“We’ve had VPI Pet Insurance for nearly 16 years,” said Jean Ann. “We’re very thankful as it has helped defray the costs of Annie’s recent treatment in addition to infrequent trips to the veterinarian over the years.”

Annie’s incident was one of more than 80,000 claims received in the month of October by VPI, the nation’s oldest and largest provider of pet health insurance, and was selected by VPI employees as the most unusual of the bunch. Honorable mentions in October included a Labrador retriever that ate a door knob, a German shepherd that ended up with fractured teeth after biting a chain saw, and a domestic shorthair cat that ate a fishing line. All pets considered for the award made full recoveries and received insurance reimbursements for eligible expenses.

As the most unusual claim submitted in October, Annie will be in the running for the 2013 VPI Hambone Award. Other nominees include Chance the Labrador retriever who was butted by a goat, Ariel the Himalayan kitten who was trapped underneath her pet parent’s garage door, and Ryder the Labrador retriever who accidentally swallowed his favorite elk antler dog chew. For more information about the VPI Hambone Award, or to read about all of the 2013 nominees, visit www.VPIHamboneAward.com.