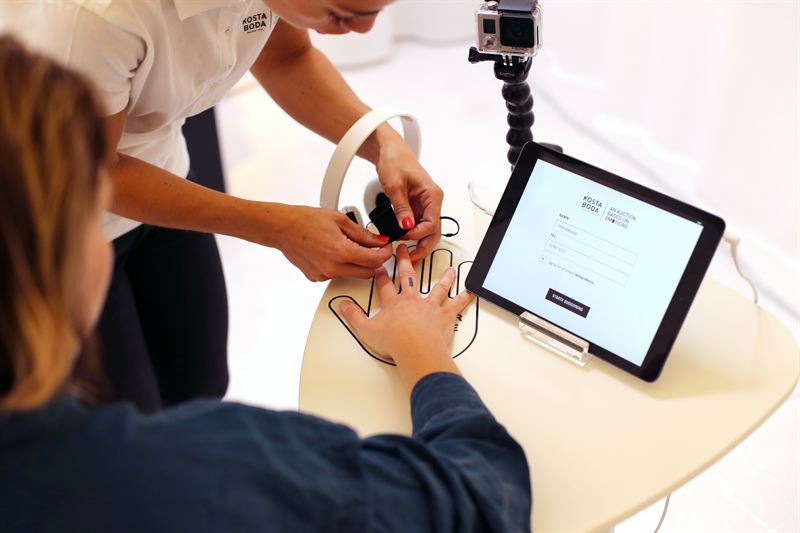 Using emotions as currency actually works. Just ask David, Liv or Shelley who won art glass worth over 25 000 euro when Kosta Boda hosted the world’s first auction based on emotions.

- It’s a great feeling to know that our unique pieces are now owned by people who definitely were not left untouched by the art glass, they felt very strongly about it, says Jenny Sundqvist. Director of Marketing and Product Development at Orrefors Kosta Boda.

The auction, which was the first of its kind, took place on the 18th of June at a gallery in central Stockholm, Sweden. What set this auction apart from traditional art auctions was the fact that the outcome was not determined by the size of your wallet. Instead, it was human emotion that really counted.

GSR-technology and heart rate sensors measured over 300 people’s feelings about three different art glass pieces by Kosta Boda’s well known artists. The technology is traditionally used in lie detector tests and had been adapted specifically for this auction. This is the first time that this type of auction has ever been arranged. The ad agency Ellermore developed the concept together with Kosta Boda and the digital agency Humblebee provided the technology.

The art pieces that were to be auctioned off were kept secret until the bidding started. The only thing the bidders knew about the pieces was their collected value of over 25 000 euro. Bidders were also able to read the artists’ own thoughts about the art in order to decide which piece to place a bid on.

When placing a bid, people were invited one by one to step into a booth where the art glass was placed under a cloth. GSR-sensors were attached to one hand in order to measure changes to the skin conductance levels. The heart rate monitor was attached to the other hand. The art glass was unveiled and for one minute the bidder was allowed to observe the piece. During that time the sensors measured changes in the biometric values in relation to each person’s baseline. The heart rate and GSR values were combined to create a final result that constituted the bid.

One of the winners, Liv Eklund Swartz, made the following comment just after she won:

- I can’t believe it. It feels amazing. I think the piece I won was the most stunning. It’s so dreamy!

Kosta Boda arranged the auction in order to draw attention to the unique art glass created in Kosta, Sweden, today. Another aim was to reach new target groups who normally do not come into contact with art glass and who would not be able to afford it.

More information about the auction is available at auctionbasedonemotions.com

Orrefors Kosta Boda AB is a design company in the Swedish province of Småland that designs and makes high-quality utility glassware and art glass. We develop, produce and sell a wide range of utility and art glass for private and public use under the brands Orrefors and Kosta Boda. We are the largest glassworks group in the Nordic countries with a history dating all the way back to 1742.

The glasswork in Kosta constitute the heart of our business. A genuine glasswork environment close to the craftsmanship and the designers. In Kosta we also run extensive tourism and events operations that attract more than one million visitors each year.

Since 2005, Orrefors Kosta Boda AB has been part of New Wave Group, which works with several brands in the consumer and corporate market in the areas of sport, leisure, furnishings and gifts. New Wave Group is listed on the NASDAQ OMX Stockholm exchange.