Pioneering technology makes OPEC countries prime regions to produce synthetic fuels. This could be a key asset in phasing out fossil fuels after the Paris Agreement, while also keeping some of the existing oil industry value chain intact, Finnish scientists say

OPEC’s current fossil business will become obsolete in upcoming decades, but oil and gas related products are still needed in a climate neutral world. The Paris Agreement requires a transition to a net zero emission world within a few decades. This means a full phase out of all fossil fuels. Yet, hydrocarbons are still necessary for sectors such as marine and aviation, as well as the chemical industry.

As OPEC countries face having to leave their oil and gas in the ground, in order to ensure their economic success in the future, OPEC needs to look for new ways of producing fuels. Investing in Power-to-Liquid technology could be the answer.

The Neo-Carbon Energy research project and technology from the Lappeenranta University of Technology (LUT) and VTT Technical Research Centre of Finland Ltd enable the production of synthetic fuels straight from the air.

The solution is built on carbon dioxide capture, water electrolysis and subsequent synthesis units such as methanation for methane and Fischer-Tropsch for liquid fuels. It depends on very low cost renewable electricity based on wind and solar, and produces synthetic fuels in a carbon neutral way. This could lead to a whole new circular carbon economy.

The cost estimates for producing liquid fuels with the solution are around $140/bbl (0.80 €/l) between 2030 and 2040, if produced in the Maghreb region. Such prices were reached for crude oil in 2008. The cost could be even less in the future, due to declining solar PV and battery costs. The potential production volumes are practically unlimited, since the Earth receives more than 1000 times more energy from the sun than it is used globally for all energy needs today. It is likely that Power-to-Fuels and Chemicals technology will gain increasing importance between 2030 to 2040.

“A net zero emission economy without this technology is practically impossible,” emphasizes Christian Breyer, professor for solar economy at LUT.

The raw materials needed in the process are carbon dioxide and water, with CO2 separated from the air. Hydrogen is generated from water by means of electrolysis. Electricity consumed in the electrolysis is supplied from renewables. Finally, CO2 and hydrogen are combined to form hydrocarbons in a synthesis reactor operated at high pressure and temperature. A future improvement might be to also use water from air, which is a byproduct of the CO2 separation from air.

“All technologies are known, most of them for decades”, says Pasi Vainikka, Principal Scientist from VTT.

Neo-Carbon Energy is feasible in areas where renewable electricity is available at a low cost. Research shows that the most cost-efficient sites for producing hydrocarbons from the air are regions with abundant solar and wind resources, such as Patagonia, the Maghreb, the Horn of Africa or Western Australia. The Middle East region is also well suited for production. The products are globally tradable as of today. Additionally, the liquids and chemicals need refining, which indicates parts of the existing global fossil oil value chain could remain after some restructuring. A new pilot plant will be opened in Finland in June.

The Neo-Carbon Energy Project will be featured in the EU Sustainable Energy Week program. 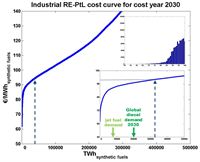