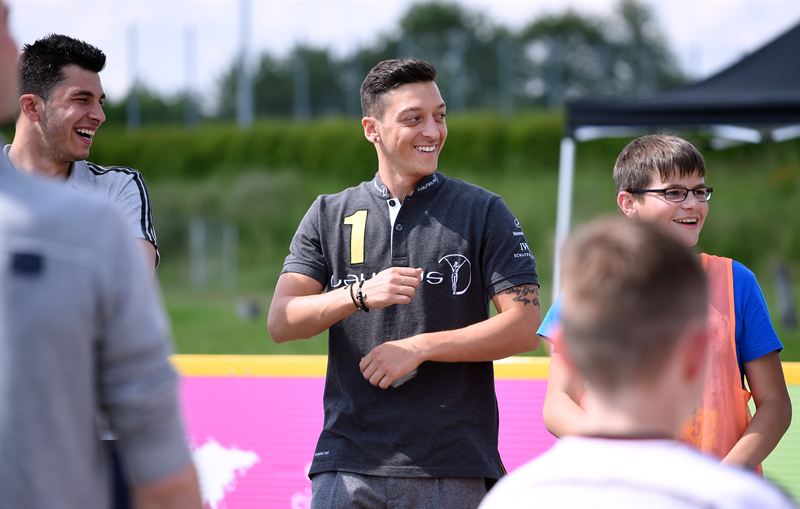 STUTTGART, June 8, 2016 – Just days before the start of the European Championship in France, Germany and Arsenal midfielder Mesut Özil has taken time out of his preparations to inspire young people from the Laureus-supported KICKFORMORE project in Stuttgart. During the visit, Özil was announced as the latest Laureus Sport for Good Ambassador.

The highly successful German football star took part in the football activities with the young people, playing by the particular rules of KICKFAIR street football.

At KICKFORMORE, two mixed teams of four players play in short matches, without a referee. Both teams agree on three individual rules before the match. Afterwards, both teams jointly evaluate whether all players have played by the rules and fairness points are awarded and added to the final score.

Mesut Özil’s visit was not only a special highlight for the project participants, but also for the player himself: "There are children here from several different cultural backgrounds, but it’s obvious that they are all united among nations and that it works out well. Most importantly, they are very respectful with each other, which is very much the same like in the German National team,” said Özil.

"For me, community involvement is very important and I can identify with the mission of Laureus Sport for Good. Sport, in my case football, has changed my life and influenced me positively. I am eager to give something back to society and to help children and young people who need assistance,” Özil commented, providing his reasoning for becoming a Laureus Sport for Good Ambassador.

An attacking midfielder known for his goal assists on the football pitch, Mesut Özil began his senior career at FC Schalke in Germany, before spending five years at Werder Bremen. In 2010, Özil signed for Real Madrid, where he won a La Liga title and the Copa Del Ray. In 2013, Ozil signed for Arsenal, where he currently plays and regularly tops the assist charts.

Internationally, Özil made his Germany debut in 2009. In 2010 he helped his country towards a third-place finish at the South Africa World Cup. In 2014, Özil played a central role in the Germany team which won the World Cup in Brazil.

In November 2014, he was presented with a special Laureus prize for his charity work after making personal donations which helped to make surgery possible on 23 Brazilian children, primarily suffering from cleft lips and palates, during the World Cup.

Özil said at the time: "Making the donation was a foregone conclusion as far as I was concerned. We wanted to make a lasting mark in the World Cup country of Brazil and this is something which I think we managed to achieve with the operations on these children."

Former KICKFORMORE participant and current project leader, Marcel Mautz, highlighted the impact the KICKFORMORE has had on his life. He said: "KICKFORMORE has changed my life. Sport showed me that I can make something of my life and move forward. And I've learned how important it is to work in a team. In KICKFORMORE all see eye to eye, we listen to each other and have the same goal. The project is for me like a family.”

Since its inception, Laureus has raised over €100 million for projects which have helped to improve the lives of millions of young people. The mission of Laureus Sport for Good is to use sport as a means to tackle some of the toughest social challenges facing young people today such as violence, discrimination and disadvantage.