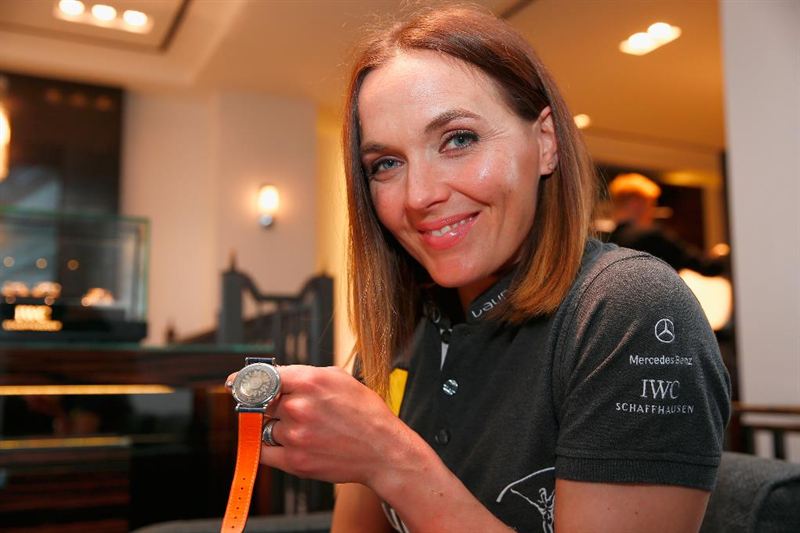 Pendleton was announced as an Ambassador at the launch of IWC Schaffhausen’s Portofino Automatic Moon Phase 37 Edition “Laureus Sport for Good Foundation” (Ref. IW459006), limited to 1,500 watches worldwide. The dial and the moon phase display feature the unmistakable Laureus blue, lending the timepiece an extraordinary plas­ticity and depth.

Each year, IWC organizes a drawing competition for children and adolescents in the context of Laureus Sport for Good’s projects. An expert jury then reviews all the entries to select the winning design to be engraved on the back of the watch. This timepiece marks the tenth special edition to be launched by the luxury watchmaker as part of its commitment to Laureus Sport for Good. This special engraving is a reminder that a portion of the proceeds from sales goes to help support Laureus projects around the world.

Designed by 16-year-old Eleni Partakki from Cyprus on the competition theme ‘Time for Sport’, the drawing depicts boys and girls playing with a ball. Eleni is a participant from PeacePlayers International Cyprus, a project which encourages Greek-Cypriot and Turkish-Cypriot boys and girls living in the divided communities of Cyprus to play basketball together.

Speaking at the launch of the Laureus timepiece, Victoria Pendleton said: “It’s an honour to join the Laureus movement. I’m a firm believer in the ability of sport to unite people and teach important lessons for life. Sport has helped me throughout my career, and it continues to do so as I develop in my new sport of horse racing. I’m looking forward to spreading the positive message of Laureus Sport for Good, I’ll be encouraging young people to work hard to achieve their goals.”

“Victoria has been an incredible role model for young people around the world. Now pursuing a career in horse racing, she continues to inspire youth with her hard work, passion and determination. I’m proud to welcome her to the Laureus family. I know she will embrace the opportunity to help young people from Laureus Sport for Good projects use sport to tackle violence, discrimination and disadvantage.”

From the pedals to the stirrups, Victoria Pendleton’s sporting career has brought huge success. Inside velodromes around the world, she broke world records, won world, Olympic, Commonwealth and European titles, and dominated sprint cycling for almost seven years in the build-up to the London 2012 Olympic Games. In London, she won gold in the Keirin and silver in the sprint, bowing out of her professional cycling career on a high in front of a home crowd.

In 2015, Pendleton announced her ambition and aim to pursue a career as a jockey. Learning her new sport quickly, she made her competitive debut in August 2015, a race in which she finished second. In March this year, Pendleton achieved her goal of participating in the Foxhunter Chase at Cheltenham Festival, finishing in a creditable fifth position.

Since its inception, Laureus has raised over €100 million for projects which have helped to improve the lives of millions of young people. The mission of Laureus Sport for Good is to use sport as a means to tackle some of the toughest social challenges facing young people today such as violence and crime, discrimination, unemployment and lack of education.