A new situation for LKAB 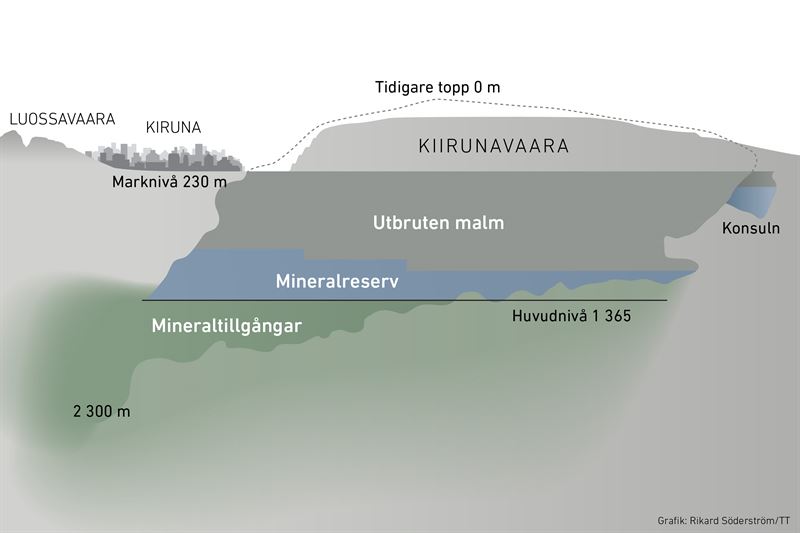 The ore deposit in Kiruna has a more complex geometry at depth than was previously assumed.
"Analyses of ongoing prospecting results indicate that the ore volumes at depth do not correspond to previous assumptions. LKAB is therefore now investing on a broad front to meet this challenge," says President and CEO, Jan Moström.

The new findings do not affect the mineral reserves and mineral resources which LKAB has thus far reported in accordance with the industry's classifications.

"This has to do with LKAB's future, with mining beyond the life expectancy of the current main level, which extends to about year 2035. One could say that LKAB is now a mining company like any other and must search diligently for new ore volumes in order to survive," says Jan Moström.

The Kiruna orebody is a slab of magnetite ore that inclines steeply into the bedrock. Since 1900, LKAB has mined it at a strike length of 4.5 kilometres and a thickness of 80–120 metres; first, in an open pit and, since the early 1960s, underground. Mining now takes place at the 1 000-metre level and several long drill holes indicate iron ore to a depth of 2,300 metres. In 2016 the decision was taken to survey the extent of the deposit towards the depths and results now show a considerable decrease in the strike direction.
"The mineralization is however still open to the north and goes deeper, so we need to do more testing to get a clearer picture. Over the years we have invested heavily in developing new, more efficient mining methods, broadening LKAB's operations and finding new deposits near our mines in other locations," says Jan Moström.

LKAB has already started a project called SUM, Sustainable Underground Mining, together with ABB, Epiroc, Combitech and Volvo Group. The aim is to set a new world standard for carbon-dioxide-free, digitalised and autonomous mining at great depth.

LKAB is now investing in pilot plant facilities and, together with environmental services company Ragn-Sells, will industrialise an innovative technology for upgrading mine waste from iron ore production. This may result in LKAB producing phosphorus and rare earth metals, which in the EU are classed as strategic minerals that are particularly important for industry.

Together with SSAB and Vattenfall, LKAB is engaged in the HYBRIT initiative, the aim of which is to develop a steelmaking process that utilises hydrogen instead of coal and coke. This represents a historic shift in technology, whereby water is emitted instead of carbon dioxide. With funding from the Swedish Energy Agency a pilot plant is now being built in Luleå.

"These three projects are important elements in LKAB's way forward. We need new technical solutions to be able to safely and profitably mine greater volumes at depth, we must adapt our operations to reduce climate impact and we need to create new business opportunities that complement the iron orebusiness," explains Jan Moström.

Mining down to main level 1 365 in Kiruna proceeds according to plan, meaning that the urban transformation of Kiruna also continues.
"The plans leading up to about 2035 remain set, and we will continue to assume our responsibility and compensate those who are affected. LKAB is entirely dependent on attractive communities in the orefields and our efforts to secure future operations go hand-in-hand with that development," says Jan Moström.

LKAB is an international high-tech mining and minerals group that mines and upgrades the unique iron ore of northern Sweden for the global steel market. Sustainability is core to our business and our ambition is to be one of the industry’s most innovative, resource-efficient and responsible companies. The group had sales of more than SEK 23 billion in 2017 and employs about 4,100 people in 13 countries. Other group business include industrial minerals, drilling systems, rail transport, rockwork services and property management. www.lkab.com