Birds of the species Parus Major (great tit) living in an urban environment are at greater risk of dying young than great tits living outside cities. Research results from Lund University in Sweden show that urban great tits have shorter telomeres than others of their own species living in rural areas. According to the researchers, the induced stress that the urban great tits are experiencing is what results in shorter telomeres and thereby increases their risk of dying young.

Telomeres are located at the end of each DNA strand in the body’s chromosomes, in both great tits and humans. The length of the telomeres can be described as a kind of age biomarker – short telomeres mean short life expectancy. According to the researchers, their study shows that the environment in which great tits grow up determines the length of their telomeres more than their genetics.

“Although there are advantages to living in cities, such as the access to food, they seem to be outweighed by the disadvantages, such as stress – at least in terms of how quickly the cells of the great tits age”, says biologist Pablo Salmón who conducts research in the field of evolutionary ecology at the Faculty of Science, Lund University.

The researchers obtained the results by studying great tit groups of siblings. Half of the siblings grew up in the countryside, half in the city. After 13 days, blood was taken to measure the length of their red cell telomeres. Pablo Salmón and his colleagues had partly anticipated the outcome, but were still surprised when they saw how big the difference in the length of the telomeres was after only 13 days.

“Previous studies have shown that genetics have an effect on the telomere length in individual birds. What we’re showing now is that growing up in a stressful environment has even more of an impact”, he says.

The study, which he conducted together with colleagues at the Faculty of Science, indicates the need for further studies to better understand how people can help birds in urban environments live longer.

“The impact that urbanisation has on wildlife must be studied much more, or we won’t be able to understand the threats that birds are exposed to in urban environments, and won’t be able to do anything about them. Our results also raise questions concerning the aging of other animals affected by urbanisation, and humans for that matter”, says Pablo Salmón. 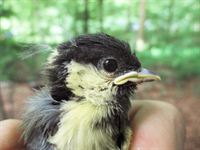 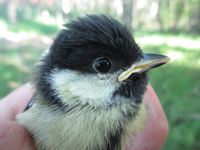