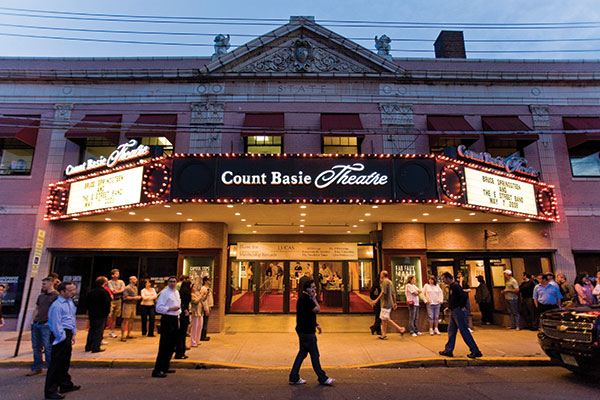 Red Bank, New Jersey was recognized by Trulia.com as one of the top towns in the United States that offer the best of both worlds: affordable living with metropolitan perks.

Located just outside of New York City (1 hour by car, 1 hour and 20 minutes via train), Red Bank homes average $238 per square foot compared with a whopping $1,425 per square foot in New York. Interestingly, Red Bank is not only lower than NYC, its also lower than the average for the NY Metro area, which is about $252.

Red Bank is an hour from New York, NY, by car or an hour and 20 minutes by train. But the commute is a small price to pay for a great real estate value. Red Bank homes average $238 per square foot compared with a whopping $1,425 per square foot in New York. Affordability is only one reason to consider Red Bank, a town that perfectly blends historic character and modern amenities. A stroll past the eateries and shops on Monmouth Street showcases the town’s walkability (you’ll find everything from crepes and pastries to a cheese shop). Red Bank’s seemingly modest live-music venue, Count Basie Theatre, hosts legends like Tony Bennett and Steve Winwood. And filmmaker Kevin Smith of Clerks and Mallrats (and a Red Bank native) opened a comic book store here called Jay and Silent Bob’s Secret Stash.

Red Bank is an all-season destination to residents and visitors who look to retreat to the New Jersey coastline for relaxation without compromising their craving for culture. The city’s rich historical roots, combined with world-class shopping, outdoor fairs and festivals, are just some of the reasons families and friends journey to the riverside city. Traditional and contemporary art galleries, award-winning theaters and performing arts venues, gourmet and casual dining, luxury boutique hotels and pristine landscapes exemplify why residents and visitors, near and far, choose Red Bank.

The Red Bank RiverCenter is a 501c3 non-for-profit organization established in 1991 by an alliance of local businesses, property owners, residents, and other stakeholders to enhance and promote Red Bank’s downtown district as a mid-Atlantic destination for dining, shopping, and culture.  The Red Bank RiverCenter helms the city’s Special Improvement District to promote Red Bank businesses through special promotions. The RiverCenter also supports the business community through recruiting new businesses to fill commercial vacancies and helps them navigate the various start-up procedures in town. For more information please visit: http://www.redbank.org/rivercenter/