A 20-year-old apprentice from ChassisCab – the Suffolk and Cambridgeshire-based DAF family-owned dealership – has scooped his fourth national accolade in recognition of his exceptional work as an apprentice at the company’s Bury St Edmunds dealership. 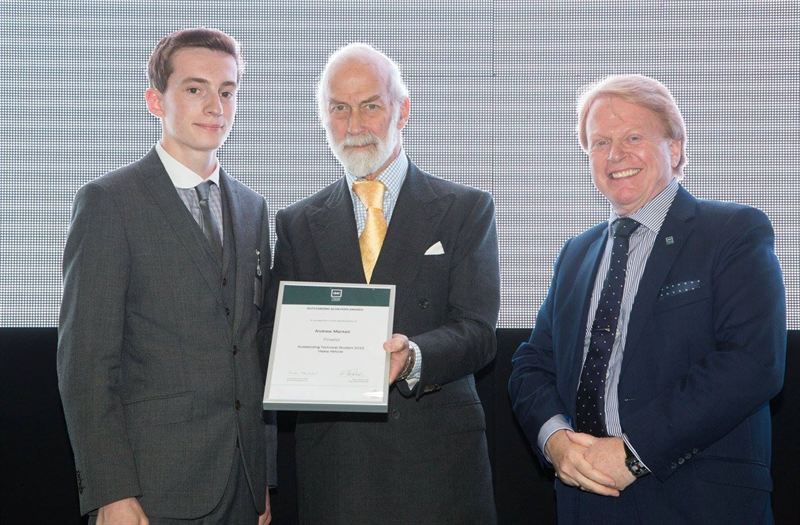 Andrew Markell, who lives in Bury St Edmunds and is a part of the multi-award winning DAF Trucks National Dealer Apprenticeship scheme, was honoured as a High Achiever Finalist in this year’s IMI Outstanding Achievers Awards staged at the home of British Motorsport, Silverstone in Northamptonshire.  He was presented with his award in the Heavy Vehicle category by His Royal Highness Prince Michael of Kent, who is patron of the IMI Group.

Commenting on his latest award, Service Manager, Phil Court from Chassis Cab, Bury St Edmunds, who went to the presentation with Andrew as a guest, said:  ‘These awards reflect the passion and dedication of outstanding achievers in the motor industry.  We are so proud that Andrew has been recognised as exceptional both with regards to his skills as an apprentice technician, and to his professionalism and approach to his work.  We know that he is an outstanding apprentice but it is good for him to know that his achievements have been recognised nationally – four times!  Whatever he is doing, he will always go the extra mile to produce the best outcome possible and that’s why he is so successful in everything he does.’

Speaking about his latest award Andrew, who joined Chassis Cab during 2013 after studying Light Vehicle Maintenance for two years at West Suffolk College, said: ‘I’m surprised and delighted with this latest accolade.’

‘I think I have inherited some of my engineering skills.  I do find that being a technician comes naturally to me.  I want to do well and try to move through the ranks ultimately securing a job in dealership management.   But at the moment I am very happy with my day job gaining lots of experience as an apprentice technician!’

14 winners were chosen for awards from 120,000 IMI Qualification learners, 30,000 IMI Accreditation holders, and Management Professionals from across the breadth of the sector.

Last year, Andrew was crowned ‘first year’ winner of the 2014 DAF Trucks National Dealer Apprenticeship Scheme after his skills were assessed by DAF’s training partner Skillnet and the City of Bristol College - where he studies on a block-attendance basis as part of his three-year apprenticeship.   Students combine practical and theoretical study at college with on-the-job training at their dealership.  He was selected as a finalist for the same award this year.

He was also invited to join the Industry Apprentice Council (IAC) - the national voice of industry apprentices - and travelled to the Houses of Parliament at Westminster to meet the government’s Apprenticeship Ambassador to Business.   The IAC consists of just 14 apprentices aged 18-24 years old from companies including Airbus, BAE Systems, Ford Dealerships, Nestlé, Vauxhall and DAF Trucks.

Robert Baxter, Dealer Principal, at Chassis Cab, said: ‘Andrew excels as a truck technician and is a credit to the Bury St Edmunds team.  He has all the skills he needs to do his job and some exceptional communications qualities that will serve him well throughout his career.’

Chassis Cab is a family owned business that has been the main DAF dealer for Suffolk since the early 1990s and DAF Service Dealer for Cambridgeshire since 2006.  Starting out as a commercial vehicle accident repair centre, Chassis Cab has grown to become one of the premier dealers for DAF and a leading supplier of trucks in the region, now with main sites at Bury St Edmunds, Ipswich and Cambridge.

Based at Addison Way in Great Blakenham, Northern Way in Bury St Edmunds, Isleham in Cambridgeshire and most recently at Newmarket Road, Cambridge, Chassis Cab now employs over 158 members of staff between its four separate locations.