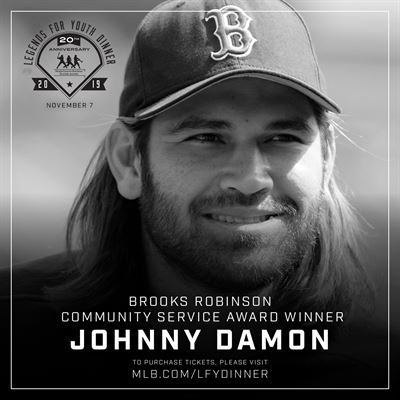 The Brooks Robinson Community Service Award is given annually by the Major League Baseball Players Alumni Association to a current or former Major League Baseball player, coach or manager. The recipient’s community service exemplifies the unselfish and humble attitude of Brooks Robinson, bettering the lives of the youth in his community. The award is given in honor of the dedication Robinson has shown to young people across the country through his support of the Legends for Youth Clinic Series and the MLBPAA since its inception in 1982. Previous winners include Manny Acta, Clint Hurdle, Adam Jones, Jamie Moyer, Jim Thome, Tim Wakefield and most recently, Terry Francona.

Due to his significant accomplishments both on and off the field, Johnny Damon will be honored as the 2019 Brooks Robinson Community Service Award winner.

In 2007, in the midst of his playing career, the two-time All-Star launched the Johnny Damon Foundation, a not-for-profit 501(c)(3) that raises and donates funds to various charitable organizations. The foundation assists local and national programs that provide leadership and growth opportunities for disadvantaged children at risk. Damon has assisted in raising funds for multiple military and veterans charities, including the Hershel Woody Williams Medal of Honor Foundation, Gold Star Families and the Wounded Warrior Project. He has also supported Strike Out Childhood Cancer, The V Foundation and PitCChIn Foundation, and participates in numerous charity golf events. For many years, Damon has hosted the Johnny Damon Foundation golf tournament, this year benefiting the Boys and Girls Club of Winter Garden.

Damon’s time in the major leagues began in 1995 with the Kansas City Royals. Just one year later, Damon tied the Royals record for most RBIs in a game. In 2000, Damon hit .327 with 42 doubles and 10 triples and led the league in stolen bases and runs scored. Damon then took his talents to the Oakland Athletics for a year until he signed with the Boston Red Sox as a free agent after the 2001 season. During his time in Boston, Damon scored at least 100 runs each season as a lead-off man and assisted in the 2004 World Series sweep. In 2006, Damon signed as a free agent with the New York Yankees, gaining another World Series championship in 2009. After leaving the Yankees, Damon played for the Detroit Tigers, Tampa Bay Rays and Cleveland Indians until retiring in 2012.

“It means so much to me to receive the Brooks Robinson Community Service Award from the Major League Baseball Players Alumni Association,” Damon said. “I always say ‘let’s continue to make the world a better place and do our part,’ and I’m striving to do more. I’m very proud to be recognized.”

The Legends for Youth Dinner aims to recognize former Major League Baseball players for their accomplishments on the diamond coupled with their off-the-field contributions to communities across the nation. The Lifetime Achievement Award will be presented to honoree Tony La Russa, and the 15th annual Heart and Hustle Award will be given as well.

The MLBPAA allocates proceeds from the event to the Legends for Youth Baseball Clinic Series. The Legends for Youth program is a series of free baseball clinics designed to provide children with positive role models, teach young players baseball fundamentals and promote the game of baseball.

To purchase a table or tickets for the Legends for Youth Dinner, please contact Nikki Warner, Director of Communications, at lfydinner@mlbpaa.com or visit www.baseballalumni.com. 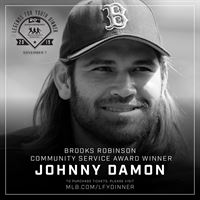