The Economic Impact of the Coffee Industry in the UK 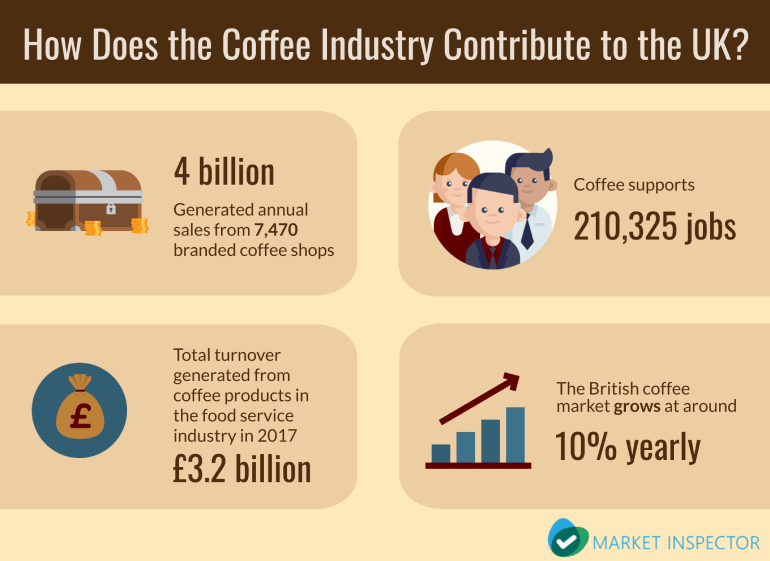 As coffee plays an important role in today’s society and economy, International Coffee Day has been introduced to the caffeinated world. Statistics reveal that coffee contributes £17.7 billion to the UK economy, and the UK has switched from being a predominantly tea-drinking nation, to a coffee-sipping country. Market Inspector presents an infographic with insights covering facts and some valuable figures about the economic impact that the UK coffee market has.

Massive coffee consumption amongst UK population
A lot of people can’t start their day without their daily boost of caffeine, whether it’s from a coffee shop, a coffee vending machine or just at home. Everyone’s favourite morning cup of coffee has become an essential drink. Study from last year say that the UK population consumed up to 95 million cups daily.

From the 95 million cups consumed, 65% is drunk at home, 25% at work or while studying, and only 10% is consumed in shops, bars, and restaurants. Coffee consumption at work has also become more and more important, with an increased demand for office coffee machines. That’s why coffee shop owners strategically open their shops nearby companies.

How does coffee arrive in our cups?
The green coffee beans on the UK coffee market have a traditional traders chain. The process starts in producing countries like Brazil or Colombia, where the beans then arrive at local traders and small holders.

The next step includes sales agents who sell the coffee beans to importers, followed by the importers connecting the suppliers in producing countries to the roasters. After this import process, the coffee beans that travelled to the UK, are also re-exported within Europe. The main destination are Germany, Ireland, and Sweden.

More coffee consumption indicates a higher turnover, but it also signifies more jobs. UK’s employment also benefits from the growing coffee market. More than 210,325 jobs have been created thanks to the coffee market. This resulted in a rise in the number of people working in coffee-related jobs. This increase represents nearly 10% between 2016 and 2017.

If you want to have more insights of the UK’s coffee market and the impact it has on the economy, you can find more information about it in the infographic here.