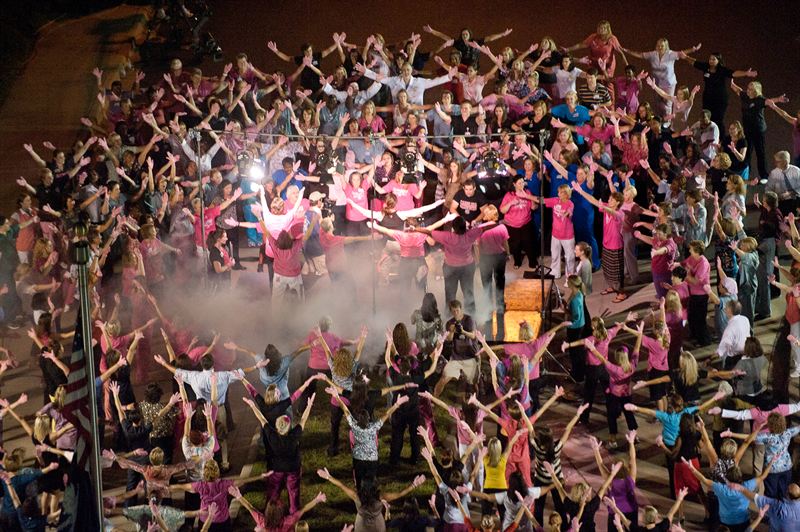 Mundelein, Ill., November 9, 2012 – There was another important national election this week – this one brought  270 organizations from throughout North America together on the same side of an important cause — spreading the word about breast cancer awareness and prevention as part of Medline Industries, Inc.’s second annual national Pink Glove Dance video competition.

Thousands of doctors, nurses, firefighters, cheerleaders and even entire towns joined forces to produce eye-popping videos, which featured dancing hospital CEOs, bopping nuns, and octogenarians popping wheelies in their wheelchairs, all for a good cause.

With more than 200,000 votes cast in the competition, Medline announced today that Lexington Medical Center in West Columbia,S.C., won first place with almost 15,000 votes. This marks the second consecutive year that Lexington Medical Center won the competition. Their creative video focused on a young nurse’s battle, and ultimate victory, over breast cancer, including her first time skydiving, as well as more than 700 hospital staff and a number of breast cancer survivors, all dancing in pink gloves to Katy Perry's hit song "Part of Me."

In all, more than 60,000 people from hospitals, nursing homes, schools and other organizations in 42 U.S. states, Puerto Rico and Canada participated in the three-week competition. Sponsored by Medline — the world's leading manufacturer of exam gloves — the national competition quickly became a national social media phenomenon with more than 3.2 million views, 200,000 votes and thousands of tweets, blogs and texts.

All of the Pink Glove Dance videos are available for viewing at www.pinkglovedance.com.

"Congratulations to the winners, and to all of the competing organizations, for honoring the hundreds of thousands of women who are diagnosed each year with breast cancer," said Andy Mills, president of Medline. "The passion and energy displayed by the thousands of participants is infectious and inspiring. They are all helping to make Medline's Pink Glove Dance a 'movement' in every sense of the word."

For every case of Medline’s Generation Pink® gloves purchased, Medline will donate $1.00 to the National Breast Cancer Foundation (NBCF) to fund free mammograms for underserved women. To date, Medline has donated more than $1 million to the NBCF.

The original Pink Glove Dance video premiered in November 2009 and featured 200 Portland, Ore. hospital workers wearing pink gloves and dancing in support of breast cancer awareness and prevention. Today the video has more than 13.7 million views on YouTube® and has inspired more than 1,000 pink glove dance videos and breast cancer awareness events across the country. Because of the overwhelming response to the original video, a sequel was produced in October 2010 featuring 4,000 health care workers and breast cancer survivors throughout North America. In 2011, the first national Medline Pink Glove Dance Video competition was held, attracting 139 entries from across North America. More than a half million votes were cast with Lexington Medical Center in West Columbia, S.C., winning first place and $10,000 to their breast cancer charity of choice, the Vera Bradley Foundation for Breast Cancer.

“Gloves are the first point of contact between the health care worker and the patient,” said Mills. “As a way to extend our breast cancer awareness campaign, we developed a pink glove called Generation Pink®, with the aim of getting people to talk about breast cancer.”

As the nation's largest privately held manufacturer and distributor of medical supplies, Medline is focused on helping to improve the quality of care for patients and residents. Breast cancer awareness is a natural extension of Medline’s corporate mission to help save lives through the early detection of breast cancer. (Visit www.medline.com/breast-cancer-awareness for details). Based in Mundelein, Ill., Medline manufactures and distributes more than 125,000 products to hospitals, extended care facilities, physician offices, surgery centers, home care dealers and agencies and other markets.