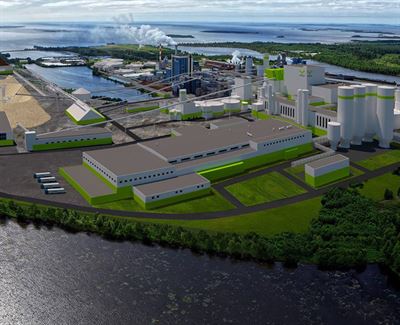 Metsä Fibre, part of Metsä Group, and Doosan Škoda Power have signed a preliminary agreement on a turbine generator with an electric power of 270 MW for the planned bioproduct mill in Kemi, Finland. The turbine is equipped with two steam bleed connections of different pressure levels and a condensing turbine section. The turbine generator, to be installed in connection with the recovery boiler, is a central part of the high energy efficiency of the new mill. It would generate electricity fully from renewable fuels. The bioproduct mill would operate without using any fossil fuels. Its self-sufficiency in electrical energy would be 250 per cent, and the surplus bioelectricity would be supplied to the national grid.

The bioproduct mill would increase the share of renewable energy in Finland by more than two percentage points. This would further strengthen Metsä Group’s position as a major electricity producer relying on renewable Finnish fuels.

“We have established high material, energy and environmental targets for the Kemi bioproduct mill. We expect our partners to reach these targets. In selecting Doosan Škoda Power as a supplier, central factors additionally included their strong experience and highly skilled experts,” says Jari-Pekka Johansson, Director of the bioproduct mill project at Metsä Fibre.

“The planned bioproduct mill in Kemi is certainly an important and ambitious project that Doosan Škoda Power is proud to participate on. The installation uses a 270 MW turbine, which makes it one of the world’s biggest turbines used in pulp production and I am happy that our turbine was chosen for this task, says Václav Lang, Area Sales Manager at Doosan Škoda Power.

Based on the preliminary agreements, the project’s degree of Finnish origin is estimated to be high, approximately 70 per cent. Preconditions for making the decision on the EUR 1.5 billion investment are expected to be in place early 2021 at the earliest, after the environmental permit process has been completed, among other things.

If implemented, the Kemi bioproduct mill will produce some 1.5 million tonnes of softwood and hardwood pulp per year, as well as many other bioproducts. The investment would secure the existing 250 jobs in the Kemi current mill. Through its direct value chain, the bioproduct mill would employ a total of around 2,500 people in Finland, which would be 1,500 people more than the employment effect of the current pulp mill in Kemi. The new bioproduct mill in Kemi would increase the value of Finnish export revenues by more than half a billion euros annually, and the mill’s annual income effect would be also over half a billion euros a year. The bioproduct mill’s annual use of pulpwood, mainly procured from Finland, would be around 7.6 million cubic metres, which is 4.5 million cubic metres more than that of the existing pulp mill.

In 2019, Metsä Group’s sales totalled EUR 5.5 billion, and it employs approximately 9,300 people. Metsäliitto Cooperative is the parent company of Metsä Group and is owned by approximately 100,000 Finnish forest owners. 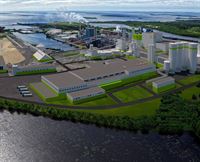