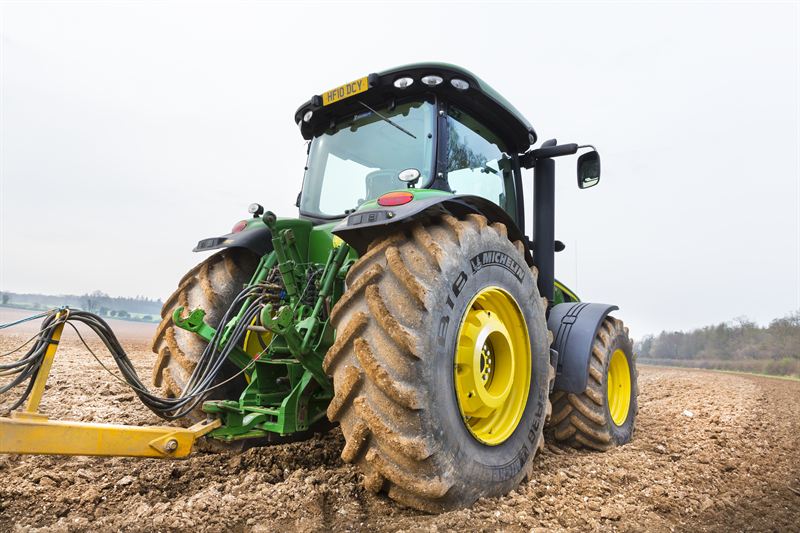 (Stoke-on-Trent – April 03, 2014) – Moundsmere Farming Company, a large scale agricultural business in Basingstoke, has radically reduced its tyre repair bills after a set of Michelin AxioBib tyres clocked up more than 4,000 hours without a single puncture.

The company, which works the notoriously hard flinty soil of Hampshire, regularly used to repair or replace its tractor tyres as the harsh nature of the land would cause rips and tears in the sidewalls.

But after fitting its John Deere 8295R with a set of AxioBib IF600/70 R30 and IF650/85 R38 tyres, featuring Michelin’s patented Ultraflex technology, Head Tractor Driver David Silvester found the fitments lasted 1,500 hours longer than other brands experienced and didn’t need to be repaired once.

He says: “Using a powerful tractor on soil in Hampshire can often be quite unforgiving for tyres, as they are constantly getting ripped and torn due to the hard ground which contains a lot of chalk and flint.  We were previously finding our tyres needed repairing and then replacing quite often, which was becoming very costly.

“We couldn’t believe how well the AxioBibs performed – they didn’t need repairing once in the whole 4,100 hours we used them and we only decided to replace them for an identical set after the traction started to run out.  Our tyre dealer even rang us and asked if we’d been dealing with someone new as they’d not heard from us in so long, but it was just that the AxioBibs were performing so well.

“Fitting Michelins may cost a bit more upfront, but the reduction in our repair bills and premature replacement costs means they’ve more than recouped what we paid for them.”

The tyres were still in such good condition upon removal they were given to a colleague to use on a smaller John Deere in Scotland, as the remaining tread depth was more than sufficient for running on roads.

Michelin’s AxioBib tyres are ideal for demanding farming operations such as ploughing, where higher-horsepower machines are needed to work fields faster. A 16 per cent bigger footprint compared to conventional tyres means the AxioBibs have superior traction, allowing farmers and contractors to save time in the field and use less fuel.

Moundsmere runs a fleet of five tractors, two telehandlers and a combine harvester and fits Michelins to the majority of its equipment.  The AxioBibs even helped Mr Silvester win several ploughing match classes this autumn.

The company purchased the new tyres through Michelin’s Flexelagri credit scheme from Micheldever Tyres, a Michelin Exelagri accredited dealer.  The flexible payment programme gives qualifying UK farmers and contractors looking to buy Michelin agricultural drive or trailer tyres, the ability to spread the cost over two years at a 0 per cent finance rate.

Michelin, the leading tyre company, is dedicated to sustainably improving the mobility of goods and people by manufacturing and marketing tyres for every type of vehicle, including aircraft, bicycles/motorcycles, cars, earthmovers, farm equipment and trucks. It also offers electronic mobility support services on ViaMichelin.com and publishes travel guides, hotel and restaurant guides, maps and road atlases. Headquartered in Clermont-Ferrand, France, Michelin is present in more than 170 countries, has 113,400 employees and operates 69 production plants in 18 different countries. The Group has a Technology Center in charge of research and development with supporting operations in Europe, North America and Asia. (www.michelin.com)