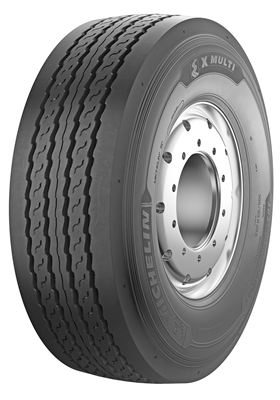 (Stoke-on-Trent – April 29, 2014) – Michelin is marking its return to the CV Show in 2014 with an exclusive global preview of its new 385/65 R 22.5 X Multi T trailer tyre, together with a range of fitments for trucks, buses, coaches and light commercials.

The CV Show marks the first time this next generation tyre has been exhibited anywhere in the world, ahead of a planned European launch this summer.

Michelin says the new tyre’s presence at the NEC signifies the importance of the UK and Irish markets, and the high-profile nature of the CV Show.

Sharn Samra, Michelin’s Head of Truck Marketing in the UK and Ireland, says: “The 385/65 R 22.5 is the second most popular commercial vehicle tyre size sold domestically and accounts for approximately 16 per cent of all tyres sold in this sector. We see huge potential for the new X Multi T; it’s a potential industry game-changer for its leap in trailer tyre performance.”

The 65-series X Multi T stands out for featuring Carbion in its rubber compound, a revolutionary new material developed by Michelin that considerably increases mileage performance with a far greater resistance to abrasion.

Under nominal conditions the operating temperature for this new tyre is 6°C lower* than the same size Michelin XTE3 fitment it will replace. This alone is a key step in helping to drive down wear rates and optimise fuel efficiency.

Samra adds: “The use of a material like Carbion is testament to the more than €600 million Michelin spends on research and development every year – greater than any other tyre manufacturer in the world. It allows us to unlock the latest innovations and ensure our tyres continue to deliver best value.”

The X Multi T will be manufactured in European ISO 14001 certified factories and is regroovable and retreadable. It is rated ‘B’ for rolling resistance, ‘B’ for wet grip and has a noise rating of just 69dB under EU tyre labelling regulations. It also carries M+S markings as an indication of suitability for use in mud and snow conditions.

Full performance data for the new tyre will be available at launch this summer.

Also making its debut show appearance in the UK is Michelin’s new 315/80 R 22.5 X Line Energy range for trucks and coaches. This new 80-series fuel-saving tyre is available as a ‘Z’ multi-position tyre and a ‘D’ drive-axle fitment, both of which were launched throughout Europe in March 2014 and feature on the Michelin stand.

The new 80-series fitments offer the optimum choice for fleets operating primarily on motorways and major trunk roads, where vehicles cover in excess of 110,000 km a year at average speeds greater than 70 km/h and with limited stops per day.

Compared with the same-size tyres in the previous-generation Michelin X Energy SaverGreen line-up, the new Michelin X Line Energy tyres last up to 5 per cent longer for drive axle tyres and 14 per cent for the multi-position tyre.

Key to their performance is a new-generation Energy Flex casing that reduces fuel consumption over the tyre’s full life by limiting heat build-up due to the repeated flexing of the tyre when in use. They also feature a new robust five-rib tread design for optimum grip, wider tread shoulders for greater longevity and superior braking performance, plus full depth sipes for greater traction.

They also feature key innovations introduced in 2012 with the 70-series X Line Energy tyre, including TowerPump sipes, which improve grip and tear-resistance in extreme conditions of use, coupled with innovative Delta sipes which reduce braking distances and improve grip when cornering on slippery road surfaces.

Both the new steer and drive tyres deliver outstanding energy efficiency with a ‘B’ rating for rolling resistance under EU tyre labelling regulations.

Together with the 70-series X Line Energy range, their launch ensures long-distance truck and coach operators seeking a fuel-saving tyre can extract the best total value of ownership from the first to the last millimetre of usable tyre tread.

Samra concludes: “At Euro VI vehicles need a tyre which can carry the increased front axle load, and this expansion of the X Line Energy range enables fleets to access potentially significant fuel savings from the latest long-distance Michelin tyres.”

Fresh from its launch in October 2013, Michelin’s new drive axle tyre for medium weight trucks and midi-coaches is also on display. This new tyre is safer, more fuel-efficient, quieter and lasts longer than the XDE2 tyre it replaced.

Its launch late last year marks Michelin’s response to environmental, economic and regulatory changes which have been introduced since the previous generation XDE2 tyres were launched in 2005.

Michelin designed this drive tyre from the outset to keep 7.5 to 16 tonne commercial vehicles in service year-round on all types of road and in all weather conditions. As a result, the X Multi D gives customers the added reassurance of 3PMSF (3 Peak Mountain Snow Flake) certification – awarded following tests in defined snowy conditions, ensuring better handling on snow-covered roads than tyres which are simply labelled M+S (Mud and Snow).

The X Multi D offers 18 per cent more tyre life than its predecessor and 12 per cent lower rolling resistance for improved fuel consumption. Full-depth sipes offer excellent handling from the first to the last kilometre, whilst new tyre architecture delivers a notable -5dB reduction in noise.

Samra says: “Michelin’s biggest challenge was designing a tyre which could offer so many improvements, without compromising performance in other areas. It takes cutting-edge technology to successfully combine all these features – we call this Michelin ‘total performance’.”

One of the most notable achievements has been making the X Multi D 50 per cent quieter than the previous generation. This is a major technological breakthrough, particularly given the number of vehicles in this sector which are used extensively in urban environments.

For van and minibus operators, Michelin will be exhibiting two examples from its popular LCV tyre range, including a summer and a cold weather fitment.

The 235/65 R 16 Agilis+ represents the latest Michelin van tyre on the market, which has been designed to help fleets combine efficiency and safety, while also reducing operating costs by being more fuel efficient and offering greater longevity than previous generations of Michelin van tyres.

The Agilis+ is joined by a cold weather tyre in the same 235/65 R 16 size. The Michelin Agilis Alpin helps to make driving safer and easier even in challenging winter road conditions.

It shortens braking distances on wet and icy roads by nearly 2m while improving traction on snow by 25 per cent compared with its predecessor, the Michelin Agilis 81 Snow Ice. It also delivers 20 per cent more mileage than the Agilis 81 Snow Ice, which can significantly reduce tyre-related operating costs. Furthermore, it has the same highly abrasion-resistant sidewalls as the Agilis+ to help protect against kerbing damage and wear.

The Agilis Alpin is used successfully by many UK fleets as an all year round fitment.

Michelin, the leading tire company, is dedicated to sustainably improving the mobility of goods and people by manufacturing and marketing tires for every type of vehicle, including airplanes, automobiles, bicycles/motorcycles, earthmovers, farm equipment and trucks. It also offers electronic mobility support services on ViaMichelin.com and publishes travel guides, hotel and restaurant guides, maps and road atlases. Headquartered in Clermont-Ferrand, France, Michelin is present in more than 170 countries, has 111,200 employees and operates 67 production plants in 17 different countries. The Group has a Technology Centre in charge of research and development with operations in Europe, North America and Asia. (www.michelin.com)