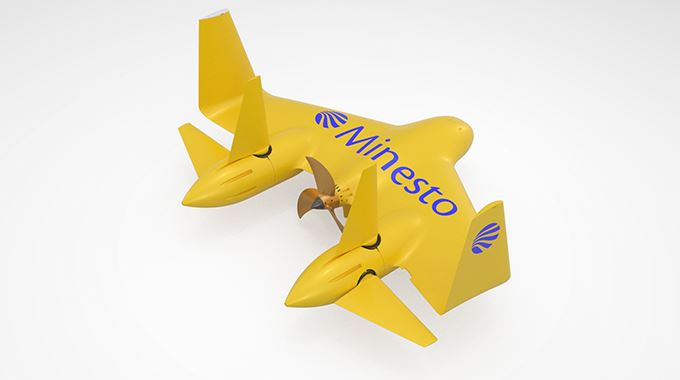 “Based on the technology’s current performance and simulations, Minesto’s next-generation marine energy power plants will be commercially ready to demonstrate the viability of ocean energy as a valuable baseload contribution to the net-zero energy mix”, said Dr Martin Edlund, CEO of Minesto.

“These activities make us confident in our predictions of how much electricity a commercial power plant will generate over a year. Our offshore operations in Vestmannasund have provided us with two crucial learnings. First, the system operates and produces grid-compliant electricity stably over time. Second, it does so fully in line with expected results”, said Martin Edlund.

The projected annual output of 3.5 GWh for a D12 (12-m wing and a rated power of approx. 1.2 MW) tidal kite system is based on installations at identified sites such as the Hestfjord strait in the Faroe Islands where Minesto together with Faroese electric utility company SEV is working towards installation of a proposed first 10 MW commercial array.

“The analysis enables us to conduct discussions with project investors and developers based on verified data. This is essential as we now gear up our customer and market development activities to commercialise our unique technology”, said Martin Edlund.

Minesto has today published a Year-End Update where CEO Dr Martin Edlund expands on this press release, while also reflecting on Minesto's progress in general during 2021. The video is available on Minesto’s website via this link: bit.ly/Minesto-YearEnd-Update.

About the Dragon Class power plants

The Dragon Class is an upgraded design of Minesto’s Deep Green technology for predictable renewable electricity generation from tidal and ocean currents. Featuring increased performance and decreased manufacturing costs, the Dragon Class will be delivered and installed in all of Minesto’s ongoing projects as well as in the build-out of the company’s first array projects in Wales and the Faroe Islands.

Minesto is currently in the procurement and manufacturing phase for five Dragon Class power plants for utility-scale and smaller microgrid installations.

Minesto is a leading marine energy technology company with the mission to minimise the global carbon footprint of the energy industry by enabling plannable commercial power production from the ocean.