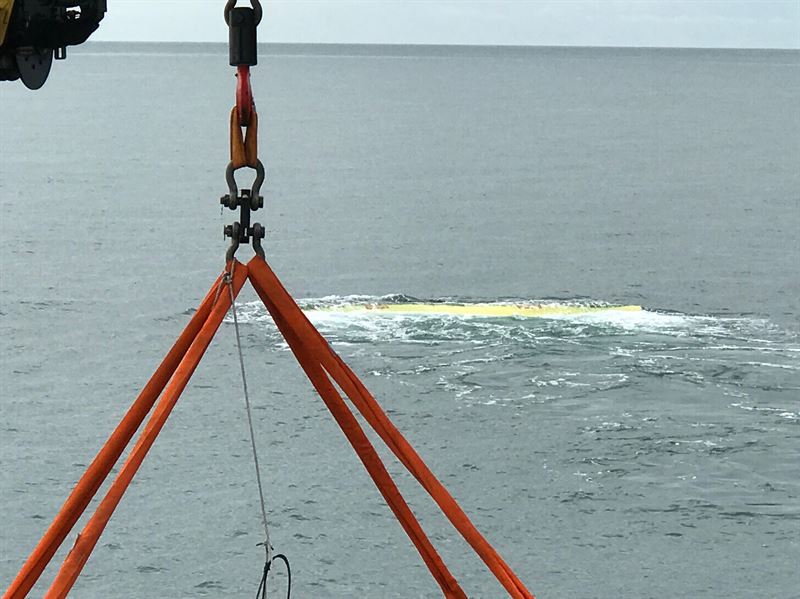 Marine energy developer Minesto has verified the functionality of its unique Deep Green technology at utility scale, marking a significant milestone for the company and for the marine energy industry.

Following a thorough commissioning program of the company’s first device of the Deep Green technology at utility scale, which generates clean electricity from tidal streams and ocean currents, developer Minesto has successfully "flown" its marine energy kite in full subsea trajectories at the Holyhead Deep site 8km off the coast of Holyhead, North West Wales.

Commenting on the milestone, Minesto’s CEO Dr Martin Edlund said: “This is a ground-breaking moment for the marine energy industry and a great accomplishment made possible by everyone that has been involved in the development of our Deep Green technology and the DG500 system now deployed in Wales.

He continued: “It is a world’s-first achievement that confirms the functionality of our patented concept at utility scale while it also reassures the fact that our technology expands the ocean energy potential and forms an essential complement to established renewables.”

Using the same principle as flying a stunt kite across the wind, Minesto’s marine energy kite flies across the underwater current, significantly enhancing the water flow speed through the turbine. This makes Minesto’s product commercially viable in globally extensive sea areas where no other known, verified technologies can operate cost effectively.

Listed on Nasdaq First North Stockholm since 2015, Minesto has funded the development of its Deep Green technology through a mix of private equity and public grants. With substantial support from the European Regional Development Fund through the Welsh European Funding Office (€13m) and InnoEnergy (€4.5m), Minesto and the Deep Green technology is the EU’s largest investment in marine energy to date.

Minesto will now continue with further testing before moving to the second commissioning phase to verify the power take-off system and electricity generation.

The information in this press release is such that Minesto AB (publ) shall announce publicly according to the EU Regulation No 596/2014 on market abuse (MAR). The information was submitted for publication, through the agency of the contact person set out above, at 12:15 CET on 30 August 2018.

Minesto is a marine energy developer with the mission to minimise the global carbon footprint of the energy industry by enabling commercial power production from low-flow tidal streams and ocean currents.

Using a patented method to streamline the energy production, Minesto’s award winning product called the Deep Green technology can be deployed in areas where no other known, verified technologies can operate cost effectively.

In May 2015, Minesto secured a €13m investment from the European Regional Development Fund through the Welsh European Funding Office, for the commercial rollout of the Deep Green technology.