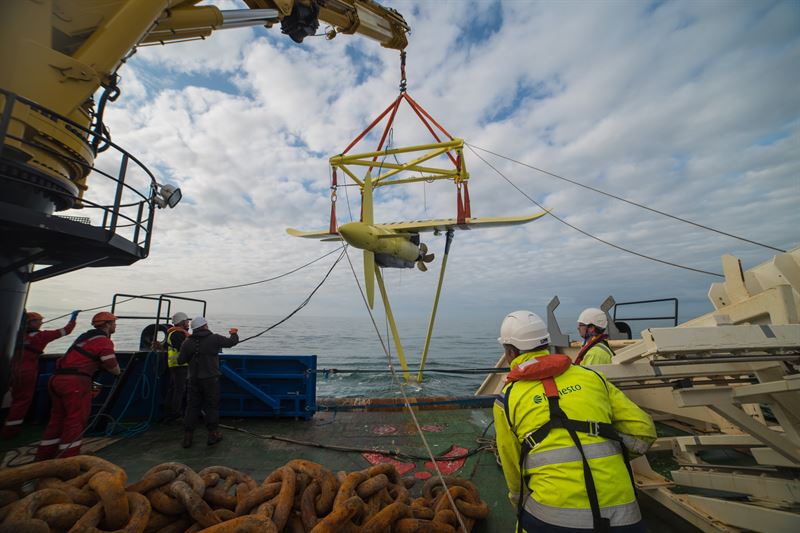 “We are proud of what we have achieved in Wales this year, the team has reached all its testing milestones in a safe and professional manner. Through the project installation, commissioning and operation activities of our DG500 device, we are pleased to successfully have verified the control system of our technology at a utility scale, and to have achieved electricity generation for the first time with a commercial-scale unit. By doing this, we have completed the test programme of our EU-funded project in Anglesey”, said Dr Martin Edlund, CEO of Minesto.

The project comprises the construction, installation and demonstration of Minesto’s first utility-scale system of its subsea kite technology called Deep Green, in the Holyhead Deep 6km off the coast of North Wales. It is supported by €13 million of EU funds through the Welsh Government.

In Spring 2018, Minesto installed and commissioned the DG500 site infrastructure; seabed foundation, tether, umbilical and a buoy containing a micro grid system. In the Summer, the power plant itself was installed and commenced sea trials. The sea trials culminated in Minesto verifying the functionality of the Deep Green technology at a utility scale and successfully flying full subsea operational trajectories. In early October Minesto generated electricity for the first time with the DG500 device.

“We have learned a lot from this commissioning and testing program, especially experience that is crucial to optimising the performance of the device and the effectiveness of all the operations. This knowledge will enhance the functionality of the supporting infrastructure at the Holyhead Deep and other development sites. We have also developed and verified procedures which creates value both in an operations perspective and a business perspective”, said David Collier, COO of Minesto.

As the test programme of Minesto’s EU-funded project has been completed, Minesto has decided to resume offshore operations of its DG500 system in the second quarter of 2019: “We intend to use the winter period to focus on maintenance and power plant upgrades”, said Dr Martin Edlund. “We are looking forward to further building on the considerable asset base we have created in North Wales by continued site development work, to realise the full potential of our Holyhead Deep site.”

The information in this press release is such that Minesto AB (publ) shall announce publicly according to the EU Regulation No 596/2014 on market abuse (MAR). The information was submitted for publication, through the agency of the contact person set out above, at 08:30 CET on 9 November 2018.

In May 2015, Minesto secured a €13m investment from the European Regional Development Fund through the Welsh Government, for the commercial rollout of Deep Green.