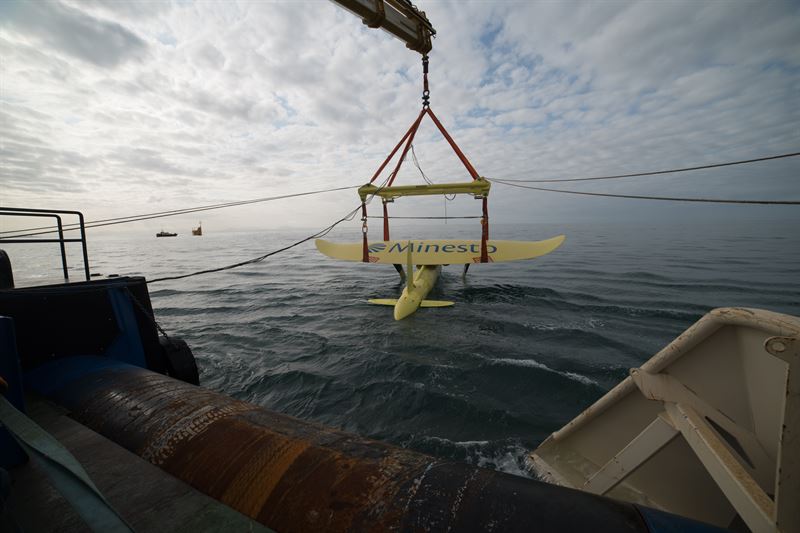 Marine energy developer Minesto has taken the next step towards commercialisation of its subsea kite technology and the development of the marine energy sector in Wales. The company has entered the formal planning phase with Welsh Government for the second stage of public funding for Minesto’s tidal energy project in North Wales.

The Welsh Government has confirmed that it will engage with Minesto in advanced business planning for the second stage of public funding for Minesto’s tidal energy project in Holyhead Deep off Anglesey, North Wales.

Minesto has submitted a project proposal, which includes a grant amounting to €11.2 million from the European Regional Development Fund (ERDF), for the next phase of the project in Holyhead Deep. The project scope includes continuous operation and power production with Minesto’s DG500 tidal energy converter that was commissioned in the Autumn 2018, upgrades and optimisation of the company’s Utility Scale product range and installation and operation of an additional utility-scale device at the Holyhead Deep site.

“Our ambition is to continue build on our world-class organisation and asset base in Holyhead, to industrialise our unique technology in North Wales”, said Martin Edlund.

Peter Ryland, CEO of Welsh European Funding Office, part of Welsh Government said: “We welcome Minesto’s bid for EU funding in support of the next phase of the project and to working with Minesto to bring that bid to the point of funding approval as quickly as possible, noting the timescales of the current phase of the project.”

The Welsh Government’s final funding decision is expected to come in the Spring 2019.

The information in this press release is such that Minesto AB (publ) shall announce publicly according to the EU Regulation No 596/2014 on market abuse (MAR). The information was submitted for publication, through the agency of the contact person set out above, at 07:00 CET on 21 December 2018.

Minesto was founded in 2007 and has operations in Sweden, Wales, Northern Ireland and Taiwan. The major shareholders in Minesto are BGA Invest and Midroc New Technology. The Minesto share (MINEST) is traded on the Nasdaq First North Stockholm stock exchange, with G&W Fondkommission as Certified Adviser, telephone +46 8-503 000 50.