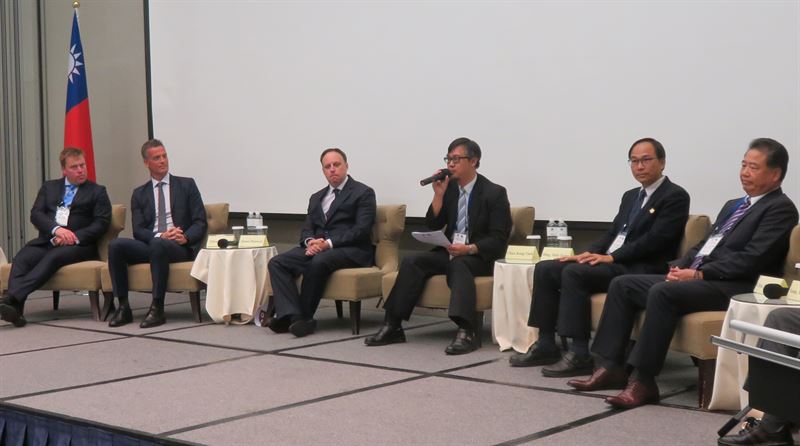 This week, Minesto participated in a Swedish trade delegation led by Stina Billinger, State Secretary at the Ministry of Enterprise and Innovation, visiting Taiwan.

Minesto took part in high-level conversations relating to Smart Cities & Sustainable Societies together with representatives of Volvo, Ericsson and AstraZeneca. Martin Edlund also had the opportunity to present Minesto and its unique product to key public stakeholders and industrial actors in attendance.

The EU Commissioner for Climate Action & Energy Miguel Arias Cañete writes in a column that “technology developments will play a crucial role“ in delivering on the EU’s new 2030 target of at least 32% renewable energy production. The commissioner highlights that the EU has pledged a total of €20bn to 14 areas of action to drive development and innovation. Miguel Arias Cañete highlights ocean energy as one of those areas, where a recently approved implementation plan will mobilise €1.2 billion “to develop a commercially viable wave and tidal industry that could meet 10 % of the European Union’s power demand by 2050.”

In November, both Swedish newspaper Göteborgs-Posten as well as CNBC, one of the world’s largest business news networks, has reported about Minesto and the company’s unique ocean energy technology.

GP: “These are smart, green companies that can save the world”

CNBC: Tidal 'kite' technology to be installed in Faroe Islands

Minesto has signed a collaboration agreement with the main power generator and distributor on the Faroe Islands, SEV, for two installations of Minesto’s DG100 model. The agreement also includes a power purchase agreement through which SEV commits to purchase the electricity generated by Minesto’s tidal energy converters.

“SEV is an advanced customer with a pioneering energy transition agenda and a world-class tidal energy resource. With Minesto’s technology, they can add a predictable and affordable source of clean energy with the potential to play a significant role in Faroes Islands’ transition to 100 percent renewable energy by 2030”, said Dr Martin Edlund, CEO of Minesto.