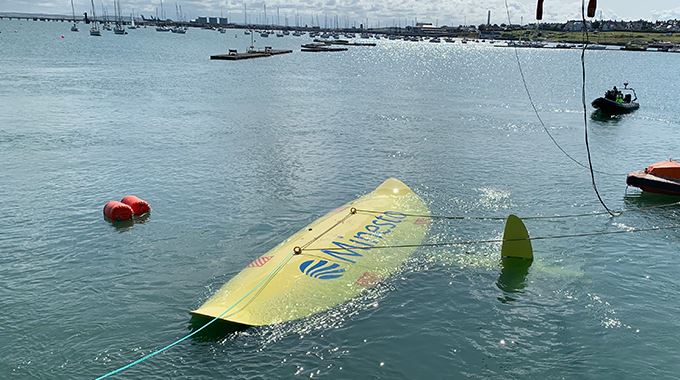 “We are very pleased to be back in the water with the DG500 kite system, and we are looking forward to the continued testing operations. The team has made a great effort in upgrading the systems over winter and has executed the installation activities in an efficient and safe manner”, said Minesto’s Chief Operating Officer David Collier.

Following the recent re-installation of some of the offshore site infrastructure in the Holyhead Deep, the DG500 kite system was towed to site where the kite was re-connected to the seabed foundation. The operations this year build on last year’s commissioning program, especially looking at long-term operations. This will be used for optimisation and cost reduction of Minesto’s unique Deep Green technology.

Bernt Erik Westre, Chief Technology Officer at Minesto commented: “It was great to see the upgraded DG500 start up and fly right away, as the current system is different from last year’s version in several key areas. The new method of installing the kite by towing and connecting it to the infrastructure at the foundation rather than on the surface worked really well. By eliminating offshore kite lifts, we have expanded our operational ability and capacity, while lowering the total cost level at the same time.”

The information in this press release is such that Minesto AB (publ) shall announce publicly according to the EU Regulation No 596/2014 on market abuse (MAR). The information was submitted for publication, through the agency of the contact person set out above, at 08:50 CEST on 15 August 2019.