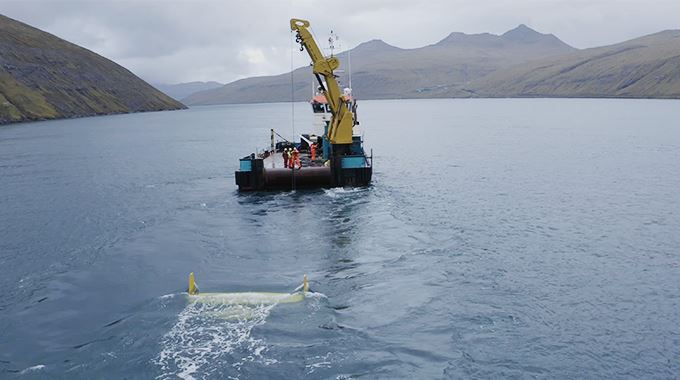 Minesto is making progress at the company’s tidal energy site in Vestmannasund, Faroe Islands, in commissioning the DG100 kite system. To date Minesto has successfully verified the key kite system functions as well as conducted safe and efficient installation and recovery procedures.

“We are currently stepping through our commissioning plan which concludes with continuous power production to the Faroese grid. So far, we have verified the main functions of the DG100 system: kite launch and recovery procedures, kite flight control, start and stop commands, slack water turns, and electricity production mode”, said Minesto’s CEO Dr Martin Edlund.

Minesto has currently a team of around 15 people in place in Vestmanna, carrying out commissioning work on the DG100 kite system designed to deliver tidal power directly to the Faroe Islands’ electricity grid. The Minesto personnel on site are made up from representatives from both the product development team in Sweden and the operations team in the UK.

“The team is doing a fantastic job taking us towards grid-connected electricity production”, said Martin Edlund.