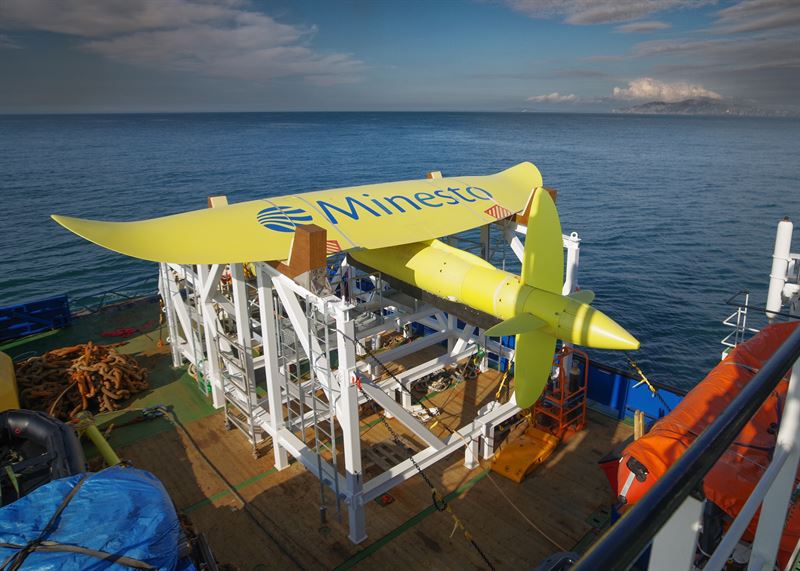 The Welsh Government has announced their continued support to leading marine energy developer Minesto following the award of €14.9 million of EU funding for the next phase of Minesto’s tidal energy scheme in Wales.

Commenting on the funding decision, Minesto’s CEO Dr Martin Edlund said: “This is a key contribution to the commercialisation of our technology and a strong sign of commitment from the Welsh Government. We are pleased to see that we share an agenda to industrialise tidal energy in Wales, to enable large-scale local clean energy production from Welsh tidal streams. By doing so we will enable long-term industrial development in North Wales.”

The €14.9 million European Regional Development Fund grant awarded through the Welsh Government will support the next phase of Minesto’s commercial development in Wales. The investment will facilitate:

Counsel General and Brexit Minister, Jeremy Miles, responsible for overseeing European funds in Wales, said: “Generating energy from renewable sources is not only vital in creating a low-carbon economy and contributing to the global challenge of climate change, it also provides Wales with a real opportunity to be at the forefront of a major emerging industry.”

Economy Minister and Minister for North Wales, Ken Skates added: “This significant investment will take Minesto’s operation to the next level, supporting the expansion of the company’s manufacturing and assembly capacity at its North Wales base. It’s good news for jobs in the area, as well as a big boost to the local supply chain.”

Listed on Nasdaq First North in Stockholm since 2015, Minesto has funded the development of its unique marine energy technology, a subsea kite technology called Deep Green, through a mix of private equity and public grants. Having previously received substantial support from the European Regional Development Fund through the Welsh European Funding Office (€13m) and InnoEnergy (€5.5m), Minesto and the Deep Green technology is the EU’s largest investment in marine energy to date.

The information in this press release is such that Minesto AB (publ) shall announce publicly according to the EU Regulation No 596/2014 on market abuse (MAR). The information was submitted for publication, through the agency of the contact person set out above, at 07:00 on 31 May 2019.