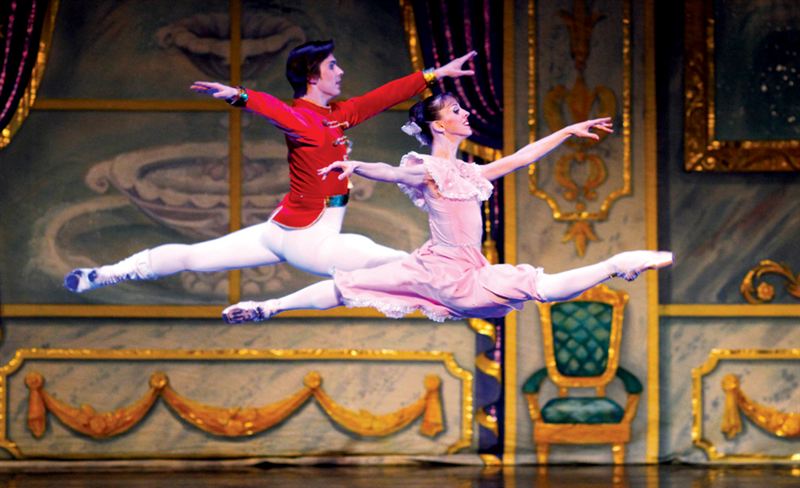 BERKSHIRES, MA (October 12, 2010) - Tickets are now on sale for Moscow Ballet’s performances  of the Great Russian Nutcracker to be performed at University Theatre at the University of Montana/Missoula, in Missoula Sunday, November 21, at the new time of 2:00pm (was originally scheduled for 1:00pm)  and Swan Lake to be performed on Sunday, November 21 at 5:00pm. To purchase tickets call 406.243.4051 or 888-MONTANA. Buy tickets online at www.nutcracker.com. Tickets start at $27.50 for the Great Russian Nutcracker and $30.00 for Swan Lake.

Moscow Ballet’s Great Russian Nutcracker stars principal artists Anna Dorosh as Masha and Maxim Chepik as the Nutcracker Prince. Spectacular scenic design, gorgeous costumes, and the exquisite artistry of 40 top Russian artists have made the Great Russian Nutcracker an American holiday tradition not to be missed. Critically acclaimed for its unique setting of Act II in the "Land of Peace and Harmony,” the Great Russian Nutcracker entertains with new characters and larger than life puppets set against a stunning backdrop of unicorns, exotic birds and animals. An ethereal Dove, a messenger of peace, leads Masha and the Nutcracker to the peaceful kingdom. Beloved Russian fairytale characters, Father Christmas and his granddaughter the Snow Maiden, add to the whimsical and imaginative storytelling that sets this Nutcracker apart.

For a truly special Christmas experience Moscow Ballet introduces its Platinum Seating and Gift promotion. Platinum ticket buyers receive a limited edition fine art print created by contemporary Russian masters from the St. Petersburg Academy of Art. These stunning first edition prints were newly commissioned to commemorate the 100th Anniversary of Marius Petipa’s life.  Renowned as the creator of Swan Lake and The Nutcracker, Petipa is revered as the “Father of Russian Ballet”. Platinum Seating includes front row* centered seats, a backstage Meet and Greet, gourmet chocolates, preferred parking and a Platinum Member’s Benefit Card for purchases at www.nutcracker.com. Only seven pairs of platinum tickets per performance are available!  Visit http://www.nutcracker.com/premium.php for information on Platinum, VIP or discount tickets.

Anna Dorosh, holder of the "National Artist of Ukraine" title and 5-time winner of international ballet competitions, captivates audiences in her dual role as Odette and Odile. She is partnered by “Honored Artist of Ukraine” Maxim Chepik.  Both Chepik and Dorosh are with the Ukrainian National Ballet in Kiev, Ukraine. Swan Lake was first performed in Moscow in 1877 by the Moscow Imperial Theater.  The dramatic choreography wedded to Tchaikovsky’s brilliant score is one of the most thrilling in ballet repertory.  The dual role of Odette/ Odile in which the ballerina first appears as the tragic Swan Queen and then as the alluring but deceptive Black Swan is one of the most dramatic and technically challenging roles in all of classical ballet.

Two simultaneous tours of the Great Russian Nutcracker and Swan Lake will visit 70 cities in the United States and Canada in November and December 2010. Ballet Masters for the 2010 tour are Vladimir Troschenko (western tour) and Anatoli Emelianov (eastern tour). For tickets and more information go to www.nutcracker.com.

Moscow Ballet - History
Moscow Ballet is known for its annual, touring Great Russian Nutcracker and full-length productions of the classic story-ballets; Swan Lake, Cinderella, Sleeping Beauty and others. Created by award-winning Juilliard alumnus, composer/conductor and theatrical producer, Akiva Talmi, the organization evolved out of Talmi’s all-star Russian "Glasnost Festival Tour" (1986-92). Moscow Ballet made its debut in 1993 with the Great Russian Nutcracker which was directed and choreographed by soloist Stanislav Vlasov of the famous Russian Bolshoi Theatre. In 1994, Moscow Ballet invited the Moscow State Theatre of Natalia Sats, and the theatre's full orchestra, to expand the company to an 88-artist tour which was billed as the "19th Century Classical Nutcracker." In 2003, Moscow Ballet announced the appointment of Vladimir Troshchenko, director of Odessa State Ballet and a pivotal figure in the ballet world, as Ballet Master and Andre Litvinov joined him in 2010 as co-Ballet Master. Moscow Ballet continues to feature top graduates of Perm, Vaganova, Moscow State Academic Choreographic and Kiev schools in its productions.