Lubricants expert Motul at the IAA Heritage by Motorworld

Cologne, 4/9/2019-On 12 September 2019, IAA Pkw 2019 opens its doors in Frankfurt. When it comes to lubricants, Motul is both traditional and modern, and will be represented at the leading international trade fair with not just one but several collaboration partners, such as Brabus and Caterham. This year, Motul is also supporting its partner Motorworld at the first special car show IAA Heritage by Motorworld, which exclusively features cars and motorbikes from the classic era. Motul enables its partners to seamlessly cover all requirements by means of its large product range: from lubricants for classic cars to high-performance liquids for the most demanding requirements in racing vehicles right through to hybrid oils for cars of the future.

From 12 September, Frankfurt will once again become a pilgrim city for car enthusiasts. And French lubricants expert Motul will be at the centre. The 300V product line and the Classic products from the lubricants manufacturer will be the focus at the vehicle trade fair, and will be surrounded by new vehicles and new technologies as well as classic cars. Motul will present its Classic 20W-50 after 1950 in a new container size exclusively at the IAA. The 50-square metre Motul stand can be found in Hall 4.0 at Stand D05.

For the first time, this year’s visitors to the IAA will be able to experience the history and culture of automobiles at a special exhibition: the IAA Heritage by Motorworld. The new format focuses exclusively on classic cars and motorbikes in the premium segment, as well as the associated high-end workmanship and corresponding service providers. Thanks to the company’s many years of experience and popularity in the classic car segment, Motul is the ideal partner for the Motorworld heritage. The special IAA exhibition will occupy a total area of over 11,000 square metres and will be situated right next to the Torhaus entrance to the fair grounds.

‘As a result of its high standards of quality in race-tested products, Motul is an absolutely reliable partner for us as tuning specialists for Mercedes-Benz’, says Sven Gramm, Marketing Manager at Brabus. The close partnership with Brabus is also on display at the IAA: Staff from the French lubricant experts will be permanently available at the Brabus stand to answer any questions from visitors on lubricants. The Brabus and Motul stands can both be found in the same hall.

Motul works with a range of top-class motor manufacturers and finishers as well as racing series. These include Caterham, Nissan Nismo and Brabus, as well as Subaru, Suzuki and the Formula Student Germany. Motul has collaborated with Brabus and Brabus Classic since 2012, and this year Caterham is also on board. The lubricants company provides motor and gearbox oil, brake fluid and coolants for initial filling and services in the mid-range finishing operations of Mercedes-Benz.

‘As of this year, Motul is a global partner of Caterham Cars Ltd., and is providing the marque and the marque trophy with oils and other operating materials’, added Sarah Petschel, Motorsports Partnerships & Event Coordinator at Motul Germany. ‘The look of the Seven model built by Caterham has remained practically unchanged for around 40 years. We use suitable products for the ever-changing modern technology under its sheet-metal dress’. You can’t miss the Motul trade fair stand – as Caterham has one of its model Seven racing cars on display there.

At the same time as the IAA, the legendary Goodwood Revival meeting will take place in England. Motul is the official lubricant partner for the historic motor sport event at Lord March’s Goodwood circuit. You can follow the races that take place on this track with touring and super sport vehicles steeped in history via livestream at the Motul stand at the IAA. As a mark of its close association with Goodwood, Motul has produced its own retro packaging in a 50s style for the Classic 20W-50 viscosity mineral oil. In this way, Motul is enabling fans of classic cars to also operate their vehicles safely and reliably.

The IAA has been one of the most important platforms for vehicle premieres and sustainable technology trends for over 100 years. The trade fair is one of the leading future platforms when it comes to mobility, and showcases the latest cars from around the world every two years. This year, the exhibition will run for the 68th time at the international trade fair grounds in Frankfurt am Main.

Motul is a traditional French company operating internationally. MOTUL Deutschland GmbH, founded in 1980, markets its products via automotive showrooms, workshops and the specialist trade, serving those channels as a thoroughly competent point of contact. Globally Motul has a leading role in developing, manufacturing and marketing high-quality lubricants for automobiles and motorbikes, among many other areas of application. With MotulTech, the lubricants manufacturer also offers products for industrial applications. Notably in the realm of synthetic lubricants, Motul ranks as simply the specialist. As early as 1971, Motul was the first lubricants manufacturer to launch an ester-based fully-synthetic engine oil on the market: Motul 300V – a technology that was first used in space travel. Today, thanks to Motul’s long-standing experience in racing sports, it is considered a renowned partner to the motor-sport scene; in this area and elsewhere, it is always working on the latest technological developments. With its unique expertise and innovative power, Motul provides support to numerous racing-sport teams, nationally and internationally. 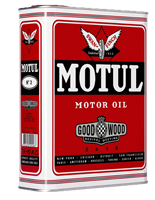