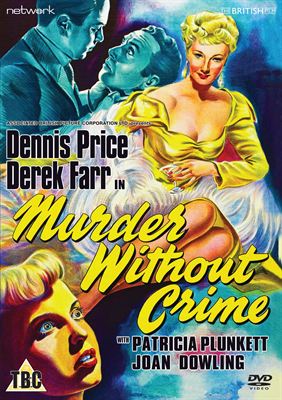 Part of “The British Film” Collection

From the director of “Cape Fear” and “The Guns of Navarone”, MURDER WITHOUT CRIME stars Derek Farr, Dennis Price, Patricia Plunkett and Joan Dowling in the fifties film adaptation of a West End play. It’s available to own as a new transfer in its correct cinema aspect ratio on 26 August 2013, RRP £9.99.

J. Lee Thompson’s directorial debut based on his play “Double Error” sees author Stephen (Farr) and his wife Jan (Plunkett) have a violent quarrel. Both storm out of the house and it seems as if their marriage is at an end. Soon, Stephen finds himself embroiled in a situation from which there appears to be no way out; in the power of a manipulative landlord (Price), and having apparently killed a woman by accident, what will he do next?