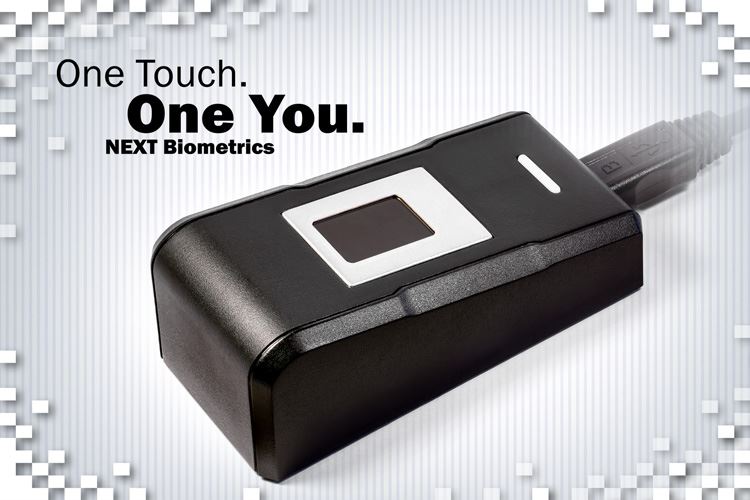 OSLO – Aug. 6, 2018 -- NEXT Biometrics (Oslo Bors: NEXT), a global leader in fingerprint sensor technology, today announced the company has received initial orders for its “Scallop” (NB-3023-U-UID) fingerprint readers for use in India’s Aadhaar government ID program. At the same time, NEXT announced its intention to create a subsidiary in India and has also made key additions to the sales organization in the country.

As previously stated, NEXT’s product plans call first for sales of Scallop fingerprint readers (L0 registered devices) and sensor modules used in equipment such as point of sale (POS) terminals and tablets. These products will be used for Aadhaar based applications like Jeevan Pramaan, the Aadhaar Enabled Biometric Attendance System (AEBAS), Aadhaar based eKYC for banks and telecom, financial inclusion initiatives and the Aadhaar Enabled Payment System (AePS), among others.

India’s Aadhaar program is the largest and most sophisticated biometrics-based government ID system in the world.

“NEXT Biometrics is moving forward quickly to provide its fingerprint sensor technology for use in India,” said Alain Faburel, NEXT Biometrics’ chief sales and marketing officer. “We’re firmly committed to growing our business in India and are taking a number of important steps to enhance our presence in the country in order to best serve our customers there.”

As NEXT ramps activity in India, the company is in the process of establishing a subsidiary headquartered in Bengaluru. Creating the subsidiary will allow NEXT to respond quickly to customer requirements and rapidly address new market opportunities. The subsidiary will be responsible for developing product features specifically for India and will help NEXT build its presence in the country by recruiting outstanding local talent.

NEXT is currently building an experienced and well-connected sales team in India led by Ameya Bhagwat, head of sales and business development for India and the subcontinent. Bhagwat has extensive experience growing business for international companies and joined NEXT late last year after holding key sales positions in India with companies such as Crossmatch (DigitalPersona) and Safran Morpho. He also served as a software engineer for the international digital security company Gemalto, earlier in his career.

Another recent key hire has been Sanjith Sundaram who serves as head of customers and compliance for India and the subcontinent. Sundaram, who joined NEXT in April, has held a number of key positions in the IT sector and also spent five years with the Unique Identification Authority of India (UIDAI) National Identity Project where he managed authentication and device ecosystems.