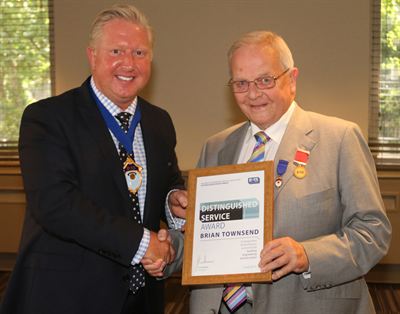 Past president Brian Townsend has become only the eighth person in the 111-year history of the Building & Engineering Services Association (B&ES) to be awarded its Distinguished Service Award.

16 July 2015 – In making the presentation, B&ES president Jim Marner explained that the Distinguished Service Award was conferred upon “those who have rendered extra-special service to the Association and its activities” – adding that the roll-call of previous recipients represented “a B&ES hall of fame”.

He went on to recall that Mr Townsend had first been elected to Council – the Association’s governing body – in 1992, and had served continuously until earlier this year.

“During that time, the many key appointments he has held include chairmanship of the Membership Committee and of the North West Region, membership of the Finance, Audit and Staff Standing Committees, directorship of training provider Building Engineering Services Training and – in the wider industry context – chairmanship of the Commissioning Specialist Association,” Mr Marner recalled.

He has also served as a trustee of the Association for almost 20 years, and was president during its centenary year in 2004, when it hosted the general assembly of GCI-UICP, the industry’s pan-European body.

“Of the many committed individuals I have met during my involvement with B&ES, I can safely claim that none has demonstrated more dedication than Brian to the interests of the Association and the sector, nor provided us with more leadership and wise counsel,” Mr Marner concluded. 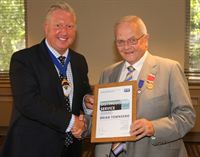