20 October 2015 – SeaSafe has relaunched an enhanced version of their SOS Dan Buoy MOB recovery device now that it has benefited from some key improvements.  Now even more compact and portable, it comes packed into a small valise with throwing handle.  This means it can be instantly deployed by throwing to the in-water casualty where it automatically inflates, standing 2 metres above the water with its light simultaneously activating, being visible up to a mile away even in high seas.  Another refinement is the addition of webbing loops that allow the person overboard to put their arms around the marker to help support them when fatigued and giving them an extra sense of security and stability.

Commenting on the products relaunch, SeaSafe's managing director Jeremy Dale, said, “SOS Dan Buoy is suitable for all vessels but really comes into its own on short-handed craft such as those typically crewed by just the husband and wife.  Being highly compact, it takes up very little room and the optional storage bracket means it can be kept ready-to-hand in the cockpit area.

“This is definitely one of the easiest MOB recovery devices to use and, importantly, no preparation is necessary – you simply throw the unit into the water and it automatically inflates.  In a vessel travelling at 6 or more knots in a moderate swell this fast deployment saves vital seconds which could prove critical to the ultimate survival of the casualty; in most cases the helmsman would not even need to leave the helm to help the overboard crew member.”

SeaSafe point out that as SOS Dan Buoy utilises an automatic Pro-Sensor inflation system, as used in many lifejackets, it means the device is completely re-usable simply by replacing the CO2 bottle and firing capsule to re-arm it.

Mr Dale adds, “Dan Buoy is just one of the many MOB systems we now offer that include other highly innovative products such as our brand new QUIKSLING and Hypo Hoist, which has recently been adopted by the RNLI.  We’d like to think we really are the ‘go to’ company – a one stop shop – for an unrivalled range of MOB recovery products.”

Operating from their own 8,000 sq ft factory in Cowes on the Isle of Wight, they are best known for pioneering the development of the all-in-one foul weather coat with integrated lifejacket – the coat that becomes a lifejacket in less than five seconds.  Now the preferred choice for professional seafarers it is worn by more harbour masters and harbour pilots worldwide than any other type of jacket.

SeaSafe today is recognised as ‘the one-stop resource’ for marine safety products for both professional mariners and recreational sailors, with product ranges designed specifically for each sector.

SeaSafe are also now the only British independently owned manufacturer of lifejacket lungs, supplying this core component of lifejackets to other lifejacket brands. 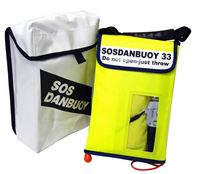