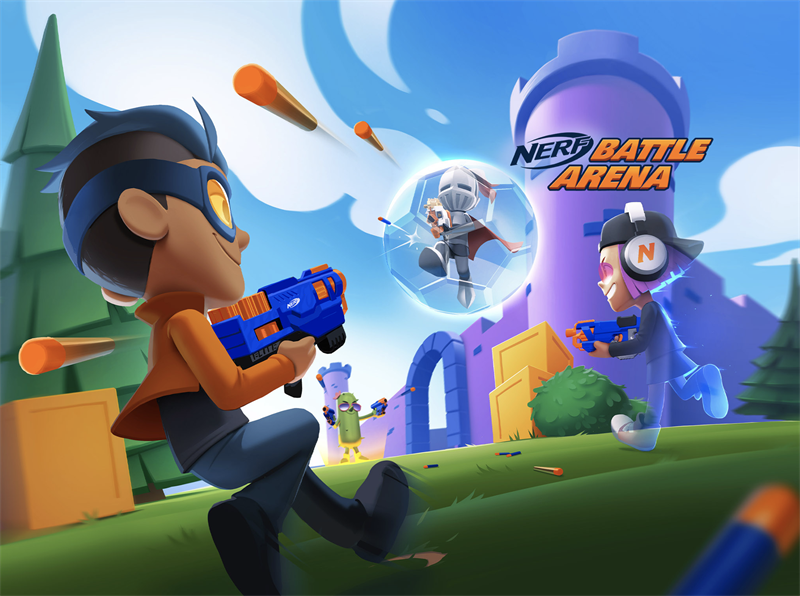 Nitro Games Oyj has today announced a new mobile game: NERF: Battle Arena. The game is a first-person multiplayer action game featuring the incredibly popular NERF blasters from Hasbro. Players will battle in competitive real-time matches against other players in modes such as Token Rush and Free for All.  The game features a variety of NERF blasters based on real world designs and each with unique performance characteristics. Players can collect and upgrade their blasters as they battle through colorful interactive arena levels. The game will bring the excitement and competitive fun of NERF to life in an exciting and innovative way.

The game is currently in soft launch in Canada and Finland for both iOS and Android. The purpose of the soft launch is to measure and optimize the game experience with a limited scale audience. During this period, the team prepares the game to be introduced to larger audiences.

Nitro Games acts as the developer and publisher of the game, and Hasbro acts as the Licensor of the brand. Nitro Games had previously, on 10 December 2020, announced that it is developing an upcoming game with an exclusive license to the NERF brand by Hasbro.

Hasbro (NASDAQ: HAS) is a global play and entertainment company committed to Creating the World's Best Play and Entertainment Experiences. From toys, games and consumer products to television, movies, digital gaming, live action, music, and virtual reality experiences, Hasbro connects to global audiences by bringing to life great innovations, stories and brands across established and inventive platforms. Hasbro’s iconic brands include NERF, MAGIC: THE GATHERING, MY LITTLE PONY, TRANSFORMERS, PLAY-DOH, MONOPOLY, BABY ALIVE, POWER RANGERS, PEPPA PIG and PJ MASKS, as well as premier partner brands. Through its global entertainment studio, eOne, Hasbro is building its brands globally through great storytelling and content on all screens. Hasbro is committed to making the world a better place for all children and all families through corporate social responsibility and philanthropy. Hasbro ranked among the 2020 100 Best Corporate Citizens by 3BL Media and has been named one of the World’s Most Ethical Companies® by Ethisphere Institute for the past nine years. We routinely share important business and brand updates on our Investor Relations website, Newsroom and social channels (@Hasbro on Twitter and Instagram.)

Nitro Games is a free-to-play mobile game developer and publisher. Nitro Games team is a multinational group of mobile gaming professionals that has the expertise from development to publishing to live-operations. The Company focuses on producing mobile games with high production value for mid-core audience. Nitro Games is specialized in the category of shooter games. With Nitro Games’ powerful NG Platform and the NG MVP process, the Company is able to carry out market validation with its games during development. Nitro Games has developed games based on its own IP such as Lootland, Heroes of Warland, Medals of War, Raids of Glory. The company offers its services also to selected customers and has developed several successful projects to leading mobile gaming companies.