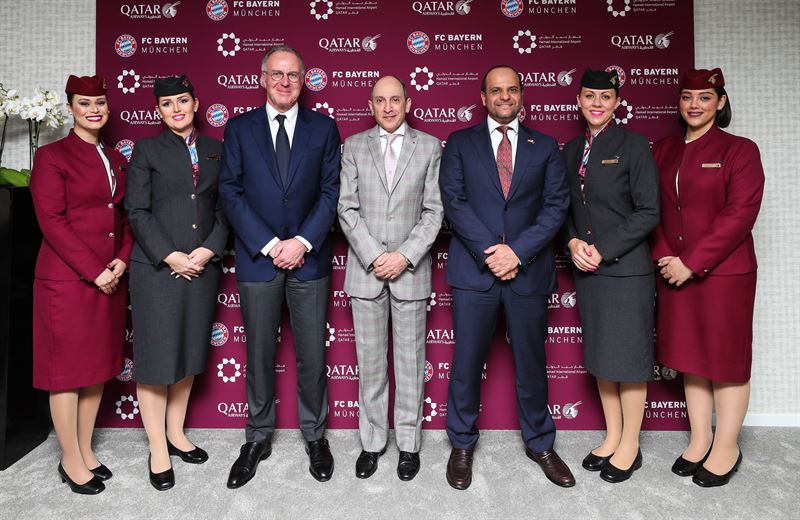 Qatar Airways is pleased to announce that it has signed a five-year partnership agreement with leading German football team FC Bayern München AG, further strengthening Qatar’s role as a global leader in sports. Under the new agreement, the award-winning airline will become an FC Bayern München platinum partner until June 2023.

Officially announced at a press conference at ITB in Germany, the five-season deal, commencing 1 July 2018, will see the airline’s logo adorning the shirt sleeves of the German league leaders. Hamad International Airport’s partnership agreement with the team, initiated in January 2016, will be continued with Qatar Airways, further strengthening the already strong ties between Qatar and FC Bayern München.

Qatar Airways Group Chief Executive, His Excellency Mr. Akbar Al Baker, who met with Mr. Karl-Heinz Rummenigge, Chairman of the Board of FC Bayern München, and other club officials at ITB in Berlin, said: “Qatar Airways is delighted to be supporting Germany’s most-winning team, FC Bayern München. We look forward to working with, and engaging with, the club, the fans, and the people of Germany to help make a real difference through this exciting new partnership. Sport is a key pillar of the long-term vision of the State of Qatar, and as Qatar’s national carrier, we welcome the opportunity to use sport as a means of bringing people together. FC Bayern München is a club that exemplifies ambition, innovation and integrity at its core. These are values we share, admire and are fundamental to Qatar Airways.”

Since 2011, the FC Bayern München team has been travelling to Doha for its winter training camp in January at the Aspire Academy enjoying the world-class facilities available to them.

Qatar Airways proudly supports a range of exciting international and local initiatives dedicated to enriching the global community that it serves. Qatar Airways, the Official Airline partner of FIFA, is a leading supporter of major global sporting events, including the 2018 FIFA World Cup Russia™ the 2022 FIFA World Cup Qatar™, and the FIFA Club World Cup™, reflecting the values of sports as a means of bringing people together, something at the core of the airline’s own brand message – Going Places Together.

Qatar Airways has been serving the people of Germany for nearly 20 years. The carrier now operates 35 weekly flights between Doha and Germany – double daily non-stop to Munich and Frankfurt – as well as daily non-stop to Berlin, providing onward connections to more than 150 destinations across the Middle East, Africa and Asia Pacific.

Yesterday, at a press conference during ITB, the world’s leading travel exhibition, Qatar Airways announced that it will be introducing its innovative First in Business class seat Qsuite on its flights to Frankfurt from May 2018, as well as Berlin and Munich by the end of summer 2018.

Qatar Airways, the national carrier of the State of Qatar, is celebrating more than 20 years of Going Places Together with travellers across its more than 150 business and leisure destinations. The world’s fastest-growing airline will add a number of exciting new destinations to its growing network in 2018, including Thessaloniki, Greece; Cardiff, UK and many more, flying passengers on board its modern fleet of more than 200 aircraft.