SnapSkan by Nokian Tyres reaches its millionth scan: The digital service reveals that 10 % of drivers take a risk with bad tires 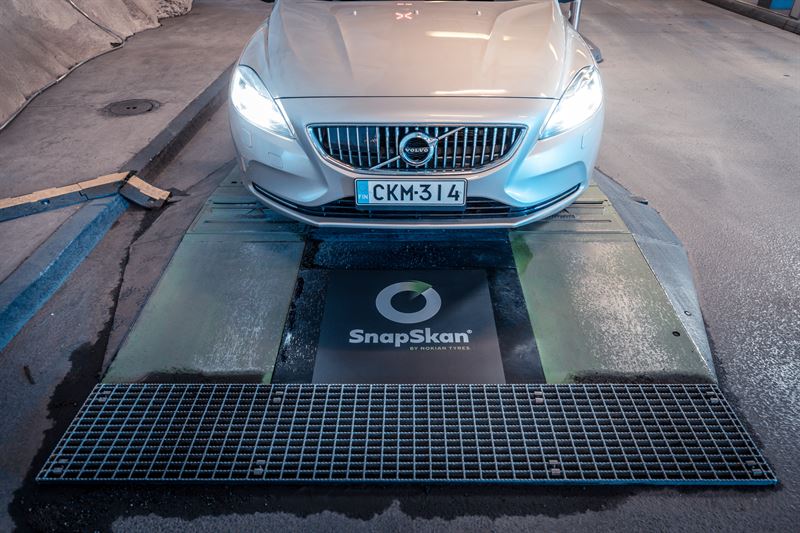 SnapSkan is a digital service developed by Nokian Tyres, that tells the driver the condition of their tires by using a drive-over scanner and the consumer’s mobile device. The service, now in operation in Scandinavia, reached its one-millionth scan this May. The results of the scans in Finland show that 10 % of Finnish drivers drive with dangerous tires.

SnapSkan was developed when Nokian Tyres realized that most drivers were unaware of the condition of their tires. Tires play an integral part in the car’s safety, as they are the only part of the vehicle actually in contact with the road.

- Modern cars are equipped with a lot of safety technology, which is great. However, no safety equipment will help keep the vehicle on the road as efficiently as tires that are in good condition, says Ville Nikkola, Head of Consumer Business Operations from Nokian Tyres.

Nokian Tyres wanted to make checking the tire condition as well as tracking it easy for the consumer.

- We placed the service in places where many people drive through every day anyway and made the results accessible via the driver’s own mobile device. As a registered user of the SnapSkan service, it is not only easy to learn the condition of your tires, but also keep up to date on it, Nikkola explains.

One million scans and counting

SnapSkan was first introduced in 2016 with one pilot location in a parking garage in Helsinki, Finland. In May 2018, the service opened up new service points covering all of Finland’s biggest cities as well as expanded to Oslo, Norway. One year after, the benchmark of one million scans was reached.

- We are happy that so many consumers have found the service, says Nikkola. – We are hoping to make the roads safer to millions of more in the future.

The lucky driver of the one-millionth scanned vehicle was Markus, who lives in Helsinki. He visited the SnapSkan service point in Kaari shopping center parking hall.

- I work on road paving work sites all over Finland and that is why road safety has a special place in my heart, Markus says. – I also believe that drivers are unaware of the condition of their tires and need to be educated more on the matter.

After one million scans, SnapSkan reveals that 10 % of Finnish drivers use tires that are dangerous on the roads because of their low tread depth. The figure is lower for winter tires than for summer tires, as the Scandinavian harsh winters require good tires for safety. Changing tires between the seasons is a requirement by law and this causes its own problems:

- Very often the condition of the tires is only checked when they are fitted on once a year. For example, summer tires can wear out a lot on hot summer roads, and are not safe anymore when the heavy autumn rains arrive. For this, SnapSkan also offers a solution, as monitoring the progress of the wearing is easy with the digital monthly reports, Nikkola says

What is SnapSkan and how does it work?

SnapSkan by Nokian Tyres is a digital service, consisting of a drive-over scanner in a public place and a digital system that provides a registered user a free-of-charge report on the condition of their tires. Drivers can register to the service by adding their register number on the SnapSkan website. As they drive over the SnapSkan scanner after registering, the scanner measures the tires’ tread depth and the system recognizes the user by their registration number. The report on the tires’ condition is then automatically sent to the user’s mobile device. If the user visits the SnapSkan service place often, they will receive a report once a month.

Nokian Tyres develops and manufactures premium tires for people who value safety and sustainability. Inspired by our Scandinavian heritage, we craft innovative products for passenger cars, trucks and heavy machinery that give you peace of mind in all driving conditions. Our Vianor chain provides tire and car services. In 2018, the company’s net sales were EUR 1.6 billion and it employed some 4,800 people. Nokian Tyres is listed on Nasdaq Helsinki. Further information: www.nokiantyres.com